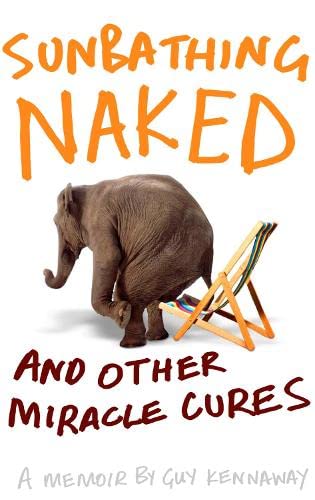 Used Price
$28.49
inc. GST
Free Shipping in Australia
A frank and funny account of learning to live with yourself
Reviews:
Trustpilot
Like New Very Good

Sunbathing Naked: and Other Miracle Cures - A Memoir by Guy Kennaway

Sunbathing Naked is one man's quest to understand the skin we're in and why we're all so obsessed with it. From the waiting rooms of Harley Street to the naked-sunbathing terraces of the Dead Sea, Kennaway navigates a multitude of cures for the incurable, telling his own provocative tale alongside the stories of a riotous identity-parade of doctors, quacks, patients and the smooth-skinned few that he meets along the way. This smart, hilarious and upbeat memoir is for anyone who has ever tried to cover up a spot, or felt their body was less than perfect.

Praise for One People Kennaway fills his stories with a warmth and humanity capable of brightening the chilliest morning * * Heat * *
Hilarious. * * Daily Telegraph * *
Kennaway's satirical portrait of life in a small Jamaican community ripples with humour and crystal clear seas . . . like Keillor, his prose is even better read aloud. * * Independent * *
This year's funniest, most thoroughly likeable novel. A fantastical yet believable microcosm of life. * * GQ * *
Like Garrison Keillor, but with stronger material. * * Arena * *
Kennaway . . . looks at the prejudiced world with a sense of satire . . . Utterly unsentimental, though always unfllinching . . . Kennaway uses case histories to great effect and pokes fun at the array of suggested cures. -- Martin Tierney * * Herald * *

Guy Kennaway lives in Wales and London. He has written three novels, including the highly acclaimed One People. He has been the recipient of the Hawthornden Fellowship, the runner-up in the Shiva Naipaul Prize and the winner of the Collins Scottish Short Story Competition.

GOR010832357
Sunbathing Naked: and Other Miracle Cures - A Memoir by Guy Kennaway
Guy Kennaway
Used - Like New
Paperback
Canongate Books Ltd
2008-06-19
256
1847670458
9781847670458
N/A
Book picture is for illustrative purposes only, actual binding, cover or edition may vary.
The book has been read, but looks new. The book cover has no visible wear, and the dust jacket is included if applicable. No missing or damaged pages, no tears, possible very minimal creasing, no underlining or highlighting of text, and no writing in the margins.