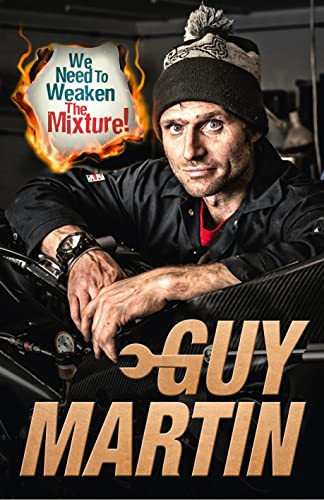 We Need to Weaken the Mixture
by Guy Martin

We Need to Weaken the Mixture Summary

We Need to Weaken the Mixture by Guy Martin

'I can't stop biting off more than I can chew. Maybe I'm wearing everything out, but I believe the body is a fantastic thing and it will repair itself and I'll go again. If it's running too rich, I don't stop what I'm doing, just weaken the mixture and carry on.'

Since we last heard from him, Guy Martin has restored a 1983 Williams F1 car then raced Jenson Button in it; helped to build a First World War tank; ridden with Putin's favourite biker gang the Night Wolves; competed on the classic endurance circuit; stood on top of one of Chernobyl's nuclear reactors and taken part in his last ever Isle of Man TT.

Then there's the stuff he really can't wait to get out of bed for: 12-hour shifts for a local haulage firm and tatie farming in his new John Deere tractor.

Besides all this, he's saved his local pub from closure and become a dad.

But let him tell you his own stories, in his own words:

'You're getting it from the horse's mouth. No filter. I hope you enjoy it.'

Except for one summer spent sleeping inside a truck in a concrete yard in Northern Ireland, Guy Martin has lived within 20 miles of the Grimsby hospital he was born in, on the 4th November 1981. But that hasn't stopped the professional truck mechanic from winning multiple international road races, plus scoring fifteen Isle of Man TT podiums. Nor has it prevented him from becoming a regular face on prime-time Channel 4, presenting critically acclaimed documentaries and travelogues, as well as his popular returning series Speed with Guy Martin. Did we mention he's also the author of three phenomenal number-one bestselling memoirs? Not bad for a truck fitter.

GOR009983006
We Need to Weaken the Mixture by Guy Martin
Guy Martin
Used - Very Good
Paperback
Ebury Publishing
2018-10-18
320
0753545470
9780753545478
N/A
Book picture is for illustrative purposes only, actual binding, cover or edition may vary.
This is a used book - there is no escaping the fact it has been read by someone else and it will show signs of wear and previous use. Overall we expect it to be in very good condition, but if you are not entirely satisfied please get in touch with us.