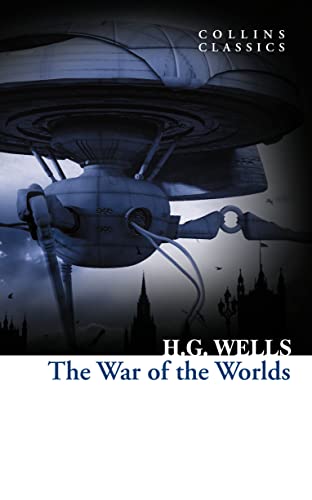 The War of the Worlds
by H. G. Wells

The War of the Worlds Summary

The War of the Worlds (Collins Classics) by H. G. Wells

"For a time I believed that mankind had been swept out of existence, and that I stood there alone, the last man left alive."

When a strange, meteor-like object lands in the heart of England, the inhabitants of Earth find themselves victims of a terrible attack. A ruthless race of Martians, armed with heat rays and poisonous smoke, is intent on destroying everything that stands in its way. As the unnamed hero struggles to find his way across decimated wastelands, the fate of the planet hangs in the balance . . .

H. G. Wells was a pioneer of modern science fiction. First serialised in the UK in 1897, The War of the Worlds is one of the earliest stories to depict conflict with an extraterrestrial race, and has influenced countless adaptations and sequels.

The War of the Worlds Reviews

'groundbreaking ... a true classic that has pointed the way not just for science-fiction writers, but for how we as a civilisation might think of ourselves' Guardian

GOR008499184
The War of the Worlds (Collins Classics) by H. G. Wells
H. G. Wells
Collins Classics
Used - Very Good
Paperback
HarperCollins Publishers
2017-01-26
240
0008190011
9780008190019
N/A
Book picture is for illustrative purposes only, actual binding, cover or edition may vary.
This is a used book - there is no escaping the fact it has been read by someone else and it will show signs of wear and previous use. Overall we expect it to be in very good condition, but if you are not entirely satisfied please get in touch with us.