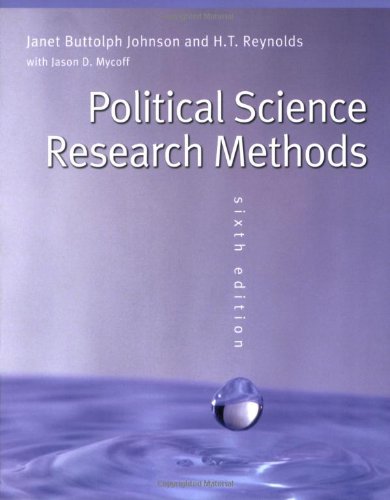 Out of Stock
$14.49
+10% GST
This book takes students step-by-step through the hows and whys of doing research into politics. Featuring building block chapters, key terms and glossaries, the text will make the prospect of research methods a much more manageable one.
Good
Only 0 left

Don't let an introduction to research methods be your students' least favorite (and most intimidating) political science course. Relevant, timely, insightful, comprehensive, and always mindful of their student audience, the authors have revamped their popular text so that the sixth edition is friendlier and more intuitive than ever-the perfect gateway to understanding not just the "how" but also the "why" behind research into politics.

Covering the discipline's major methods, the authors lead students step-by-step through the logic of research design. "Building block" chapters on hypothesis formation and testing, variables, and measurement are right up front; the introduction to research design, sampling, and literature reviews now come with more explanation as to why a researcher would pursue different kinds of methods; the stats chapters begin with a common-sense primer that walks students through foundational ideas and practices. Throughout the text, updated examples of contemporary research problems keep readers engaged.

Each chapter has bolded key terms that are also listed in a glossary at the end of each chapter and the end of the text. "Helpful hints" feature boxes give students nuts-and-bolts reminders they can refer to when they conduct their own research or assess the work of others.

NEW TO THIS EDITION

New examples of political science research in Chapter 1, including a case on judicial decision making and current research into public opinion on the war in Iraq.

Expanded discussion of theory in Chapter 2, showing how competing paradigms can be applied to the same topic of study.

Substantially updated discussion of survey research including coverage of Internet polling and a fuller description of interviewing.

Computational formulas and calculations are now featured in "How It's Done" boxes allowing students to separate lengthy calculations from substantive discussion of the meaning or interpretation of statistical results.

Greater coverage of newer developments in applied statistics, including exploratory data analysis and descriptive and inferential statistics for counts and functions of counts. In general, less emphasis on computation, and more on interpretation.

Reorganized statistics chapters for better comprehension with regression analysis and logistic regression in their own chapters.

A new overview of statistical analysis, including discussion of data preparation, description, modeling, inference, interpretation, and the communication of results.

I have found Johnson and Reynolds' Political Science Research Methods to be one of the most important texts which I have adopted, not only for this course, but for any one. Many methods texts which are published are directed at the social sciences in general. This text is superior to the more general social science texts and other political science methods texts with which I am familiar because it successfully engages students in building methodological and statistical literacy. The book incorporates much of the important foundational information that today's undergraduate political science major needs to learn. The need to study both human behavior as well as institutions requires a more focused course of study. This text is superb because it provides students with a host of applications specific to the discipline. It is accessible and yet it does not encourage lower order thinking. I am very likely to continue to use this text because of its comprehensiveness and design

Janet Buttolph Johnson and H.T. Reynolds have developed an outstanding research methods textbook that has wide applicability for both undergraduate and graduate courses. It has been the primary textbook in my undergraduate political analysis class for several years because it offers a sophisticated introduction to empirical political science and both qualitative and quantitative research methods, while presenting the material in a writing style that is easily accessible to undergraduate students. The range of methods discussed in the book and the many topical examples it provides has given me great flexibility to select exactly what I wanted to use in class. The companion workbook has been a great resource for homework assignments and in-class exercises and discussions. I consider this the leading textbook of its kind

Political Science Research Methods offers students a comprehensive and engaging view of both the scientific research process and the application of research methods. The authors skillfully integrate examples throughout the book that illustrate how scholars utilize methodological techniques to address substantive theoretical questions in political science. In so doing, the book systematically unpacks the foundation for understanding, evaluating, and producing scientific research. The companion workbook, Working with Political Science Research Methods, provides exercises and data sets to help students build an applied foundation for the statistical techniques they learn about in the text. The superb balance achieved between methodological theory and application makes the entire package an immensely valuable tool for both students and teachers