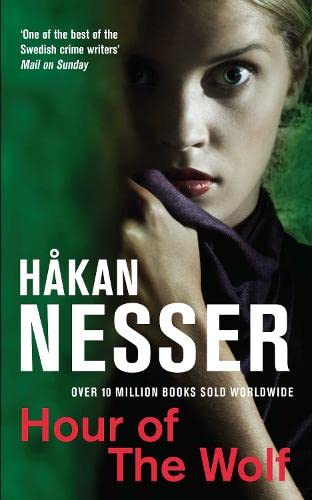 Hour of the Wolf
by Hakan Nesser

In Stock
$29.49
inc. GST
The master of Swedish crime fiction returns with the winner of the prestigious Scandinavian Glass Key Award
Very Good Good
6 in stock

Hour of the Wolf Summary

Hour of the Wolf by Hakan Nesser

In the dead of night, in the pouring rain, a drunk driver smashes his car into a young man. He abandons the body at the side of the road, but the incident will set in motion a chain of events which will change his life forever.

Soon Chief Inspector Van Veeteren, now retired from the Maardam police force, will face his greatest trial yet as someone close to him is, inexplicably, murdered.

Van Veeteren's former colleagues, desperate for answers, struggle to decipher the clues to this appalling crime. But when another body is discovered, it gradually becomes clear that this killer is acting on their own terrifying logic . . .

Hour of the Wolf Reviews

`Hakan Nesser, the godfather of Swedish crime ... His Van Veeteren novels have a puckishness and sprightliness that too often elude his younger, gloomier pretenders ... Nesser has thus far only been a minor player in the British Nordic crime scene: Hour of the Wolf should be the book to change that' Metro
`The Swedish novelist Hakan Nesser is in another league, exhibiting a skill and consistency rare in crime fiction. Hour of the Wolf, translated by Laurie Thompson is one of his finest novels, starting with a road accident and unravelling its terrible consequences. The victim is a 16-year-old boy, struck by a car while walking home late at night, and the accident sets in motion a series of murders. One of the victims is related to Nesser's detective, Chief Inspector Van Veeteren, who has retired to become an antiquarian bookseller. The ex-policeman's old team rallies to obtain justice for their much-loved former boss in a novel that combines a clever plot with authentic emotion' Sunday Times
`All the tropes of Scandinavian crime: physical and metaphysical gloom, desolate landscapes and circumscribed lives. However, it is a grown-up, rather than a depressing read. The investigating cops are skilfully differentiated and their banter is amusing. As for the plot ... it contains enough twists to keep you reading through the Bergmanesque darkness' Mark Sanderson, Evening Standard
`Of the Nordic crime writers currently holding readers' attention in an unbreakable grip, Hakan Nesser is comfortably the most anglocentric. Nesser himself has a notably dry and ironic sense of humour, more redolent of this island than Sweden, and intermittently makes London his home. He also has something in common with another great generator of suspense, Leytonstone-born Alfred Hitchcock: a preoccupation with guilt and the way in which crime draws everyone connected with it into a dark moral miasma - as in the latest book to reach these shores, Hour of the Wolf . . . All this is dispatched with the assurance that readers have come to expect from the author of such quietly compelling crime fiction as The Return and Woman With Birthmark. As before with Nesser, we are reminded of the writer Ruth Rendell in the coolly methodical fashion in which lives are destroyed by a crime, those of both the victims and the perpetrators . . . there is not a single misstep as the grim implications of the narrative are teased out. And - as with Hitchcock - the guilt of a single character becomes a kind of amorphous mass, affecting everyone involved, muddying moral distinctions' Independent
`Nesser, an award-winning writer who has sold millions worldwide, has an easy style which pulls the reader along nicely...Comparisons with other Scandinavian thriller writers don't work as Nesser has a style all his own, making him a writer who needs to be on the bookshelves of all crime fans. And in Van Veeteren he has created a hero who is easy to like' Edinburgh Evening News
`All too chillingly plausible tale' Daily Mail
`If Scandinavian gloom lights your candle, Hakan Nesser's Hour of the Wolf will have you howling with pleasure . . . Desolate landscapes and quirky characters are described with impressive skill' Evening Standard `Best books for summer 2012`

Hakan Nesser is one of Sweden's most popular crime writers, receiving numerous awards for his novels featuring Inspector Van Veeteren, including the European Crime Fiction Star Award (Ripper Award) 2010/11, the Swedish Crime Writers' Academy Prize (three times) and Scandinavia's Glass Key Award. The Van Veeteren series is published in over 25 countries and has sold over 10 million copies worldwide. Hakan Nesser lives in Gotland with his wife and spends part of each year in the UK.

Also available from Hakan Nesser: Borkmann's Point, The Return, The Mind's Eye, The Inspector and Silence, The Unlucky Lottery

GOR003682551
Hour of the Wolf by Hakan Nesser
Hakan Nesser
The Van Veeteren series
Used - Very Good
Hardback
Pan Macmillan
2012-04-06
448
0230745741
9780230745742
Winner of Glass Key Award 2000 (UK)
Book picture is for illustrative purposes only, actual binding, cover or edition may vary.
This is a used book - there is no escaping the fact it has been read by someone else and it will show signs of wear and previous use. Overall we expect it to be in very good condition, but if you are not entirely satisfied please get in touch with us.