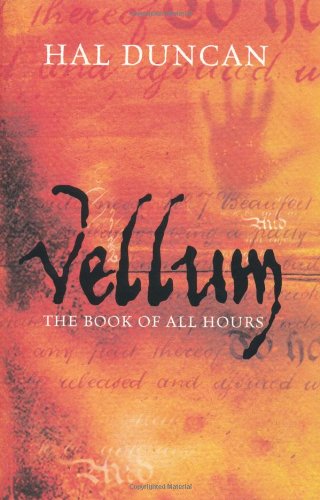 In Stock
$14.49
inc. GST
A magnificent, fantastical literary epic of Heaven and Hell in direct conflict, with sleeper agents who will murder, rape and torture at their master's command, and where the heroes will be lucky to save their own skins
Very Good
Only 1 left

Vellum: The Book of All Hours by Hal Duncan

It's 2017 and the End Days are coming, beings that were once human gathering to fight in one last great war for control of the Vellum - the vast realm of eternity on which our world is just a scratch. But to a draft-dodging Irish angel and a trailer-trash tomboy called Phreedom, it's about to become brutally clear that there's no great divine or diabolic plan at play here, just a vicious battle between the hawks of Heaven and Hell, with humanity stuck in the middle, and where the easy rhetoric of Good and Evil, Order versus Chaos just doesn't apply. Here there are no heroes, no darlings of destiny struggling to save the day, and there are no villains, no dark lords of evil out to destroy the world. Or at least if there are, it's not quite clear which is which. Here, the most ancient gods and the most modern humans are equally fate's fools, victims of their own hubris, struggling to save their own skins, their own souls, but sometimes . . . just sometimes . . . sacrificing everything in the name of humanity.

"Vellum is a mind-blowing read that's genuinely like nothing you've ever read before. . . The imaginary worlds that he dreams up are stunning. . . Vellum has expanded fantasy's limits like nothing published in years." SFX

"In Vellum-a monstrously brilliant and often hilarious novel of mad Irishmen, bad angels, femmes fatales, and demons-we are presented with the tale of a war occurring throughout the breadth and depth of time and space. Hal Duncan has, at the very least, created the Guernica of science fiction."-Lucius Shepard, author of A Handbook of American Prayer "A mind-blowing read that's genuinely unlike anything you've ever read before . . . Vellum" "has expanded fantasy's limits like nothing published in years."-SFX (five-star "must-read" review) "Duncan's writing is fluent and powerful. He possesses an imagination capable of both conjuring worlds and capturing the intricacies of moments. Vellum is more than a novel; it's a vision."-Jeffrey Ford, author of The Girl in the Glass "A remarkably ambitious debut novel. For lovers of innovative fantasy, it's a must-read."-Interzone "Vellum is a revelation-the opening gambit in the career of a mind-blowing colossal talent whose impact will be felt for decades."-Jeff VanderMeer, author of City of Saints and Madmen

Hal Duncan lives in Glasgow, and this is his first full-length novel.

GOR000801579
Vellum: The Book of All Hours by Hal Duncan
Hal Duncan
Used - Very Good
Paperback
Pan Macmillan
2006-07-07
512
0330438360
9780330438360
Short-listed for Locus Award Best First Novel 2006 (UK)
Book picture is for illustrative purposes only, actual binding, cover or edition may vary.
This is a used book - there is no escaping the fact it has been read by someone else and it will show signs of wear and previous use. Overall we expect it to be in very good condition, but if you are not entirely satisfied please get in touch with us.