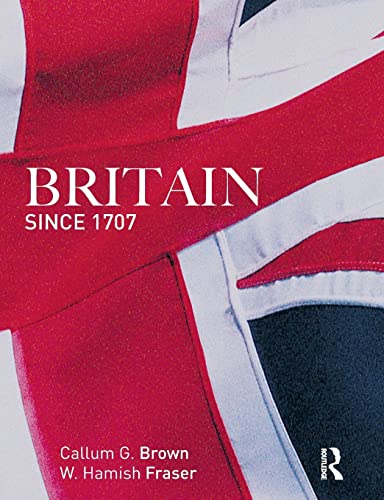 Britain Since 1707
by Hamish Fraser

Britain Since 1707 by Hamish Fraser

Britain since 1707 is the first single-volume book to cover the complex and multi-layered history of Great Britain from its inception until 2007.

Bringing together political, economic, social and cultural history, the book offers a reliable and balanced account of the nation over a 300 year period. It looks at major developments - such as the Enlightenment, the growth of democracy and gender change - while also tracing the distinctive experience of different, the book's additional features include: social and ethnic groups through the decades. Fully integrating Scotland, Wales and the Irish experience, the book's comprehensive sweep includes coverage of the industrial revolution, the British Empire, the two world wars and today's multicultural society.

Ideally structured to support courses and classes on British history

* 'Focus On' sections with original documents and sources

* Timelines and tables to aid understanding

From Queen Anne to Gordon Brown, this wide-ranging and accessible book provides a complete and up-to-date history of Britain. Offering a coherent account of the evolution of the nation and its people, it will be essential reading for all students of British history.

Callum G. Brown is professor of religious and cultural history at the University of Dundee. He is the author of eight books including Religion and Society in Twentieth-Century Britain (2006), Postmodernism for Historians (2004) and The Death of Christian Britain (2001). W. Hamish Fraser was professor of modern history at the University of Strathclyde. His publications include A History of British Trade Unionism 1700-1998 (1999) and The Coming of the Mass Market (1981), and he has also edited volumes on the histories of Glasgow and Aberdeen.

GOR006163054
Britain Since 1707 by Hamish Fraser
Hamish Fraser
Used - Very Good
Paperback
Taylor & Francis Ltd
2010-04-15
704
0582894158
9780582894150
N/A
Book picture is for illustrative purposes only, actual binding, cover or edition may vary.
This is a used book - there is no escaping the fact it has been read by someone else and it will show signs of wear and previous use. Overall we expect it to be in very good condition, but if you are not entirely satisfied please get in touch with us.