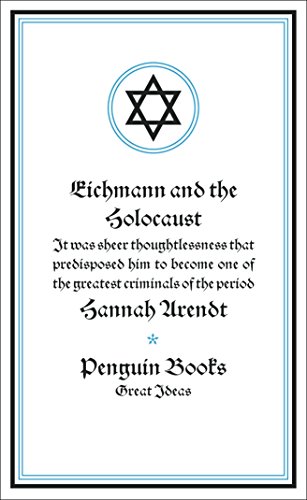 Eichmann and the Holocaust
by Hannah Arendt

Eichmann and the Holocaust Summary

Eichmann and the Holocaust by Hannah Arendt

Throughout history, some books have changed the world. They have transformed the way we see ourselves - and each other. They have inspired debate, dissent, war and revolution. They have enlightened, outraged, provoked and comforted. They have enriched lives - and destroyed them. Now Penguin brings you the works of the great thinkers, pioneers, radicals and visionaries whose ideas shook civilization and helped make us who we are.

Inspired by the trial of a bureaucrat who helped cause the Holocaust, this radical work on the banality of evil stunned the world with its exploration of a regime's moral blindness and one man's insistence that he be absolved all guilt because he was 'only following orders'.

Eichmann and the Holocaust Reviews

Great Ideas... is the right name for these slim, elegant paperbacks... They are written with precision, force, and care. ("The Wall Street Journal") Penguin Books hopes to provide an economical remedy for time-pressed readers in search of intellectual sustenance. ("USA Today")

Hannah Arendt was born in Germany in 1906. She fled Germany in 1933, having received her doctorate in philosophy from the University of Heidelberg. Between 1933 and 1941 she worked in France helping Jewish refugee children emigrate to Palestine. After moving to the United States Hannah Arendt held many influential positions in many universities. She died in 1975.

GOR008031085
Eichmann and the Holocaust by Hannah Arendt
Hannah Arendt
Penguin Great Ideas
Used - Like New
Paperback
Penguin Books Ltd
2005-08-25
144
0141024003
9780141024004
N/A
Book picture is for illustrative purposes only, actual binding, cover or edition may vary.
The book has been read, but looks new. The book cover has no visible wear, and the dust jacket is included if applicable. No missing or damaged pages, no tears, possible very minimal creasing, no underlining or highlighting of text, and no writing in the margins.