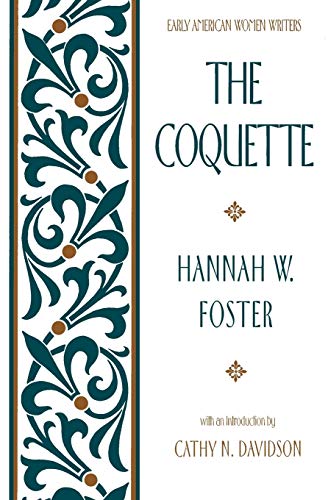 The Coquette
by Hannah W. Foster

In Stock
$15.99
inc. GST
The `sentimental novel', in the tradition established by Samuel Richardson, was very popular in post-revolutionary America. This novel and `Charlotte Temple' were two of the most successful examples.
Very Good
Only 3 left

The Coquette by Hannah W. Foster

The Coquette tells the much-publicized story of the seduction and death of Elizabeth Whitman, a poet from Hartford, Connecticut. Written as a series of letters-between the heroine and her friends and lovers-it describes her long, tortuous courtship by two men, neither of whom perfectly suits her. Eliza Wharton (as Whitman is called in the novel) wavers between Major Sanford, a charming but insincere man, and the Reverend Boyer, a bore who wants to marry her. When, in her mid-30s, Wharton finds herself suddenly abandoned when both men marry other women, she willfully enters into an adulterous relationship with Sanford and becomes pregnant. Alone and dejected, she dies in childbirth at a roadside inn. Eliza Wharton, whose real-life counterpart was distantly related to Hannah Foster's husband, was one of the first women in American fiction to emerge as a real person facing a dilemma in her life. In her Introduction, Davidson discusses the parallels between Elizabeth Whitman and the fictional Eliza Wharton. She shows the limitations placed on women in the 18th century and the attempts of one woman to rebel against those limitations.

This novel captures very well the dilemma of late 18th-Century American women. Despite their own misgivings about reading a novel of this sort students became caught up in Eliza Wharton's plight and quickly understood the forces at work in her life. It makes a great text for class discussions. * Sonya Michel, University of Illinois at Urbana-Champaign *
An extremely perceptive introduction, intelligent and accurate. The text is nicely done. Making this important document available is a real service. * Jack Scherting, Utah State University *
Handsome, useful, well-introduced edition of a very important text. * Timothy Morris, University of Texas, Arlington *
I like Davidson's introduction quite a bit; good choice! * Christine De Vinne, Ohio State University *
A very well presented and important volume. * Dr. Marion Perry, Erie Community College-South *
This edition, with the invaluable introduction by Cathy Davidson, is a wonderful teaching text for courses in American Literature, Women's Literature, Introduction to Literature and Cultural Literature. * Lorrayne Carroll, University of Southern Maine *

Cathy N. Davidson, Professor of English at Michigan State University, is author most recently of Revolution and the Word: The Rise of the Novel in America.

GOR003199160
The Coquette by Hannah W. Foster
Hannah W. Foster
Early American Women Writers
Used - Very Good
Paperback
Oxford University Press Inc
1987-02-19
192
0195042395
9780195042399
N/A
Book picture is for illustrative purposes only, actual binding, cover or edition may vary.
This is a used book - there is no escaping the fact it has been read by someone else and it will show signs of wear and previous use. Overall we expect it to be in very good condition, but if you are not entirely satisfied please get in touch with us.