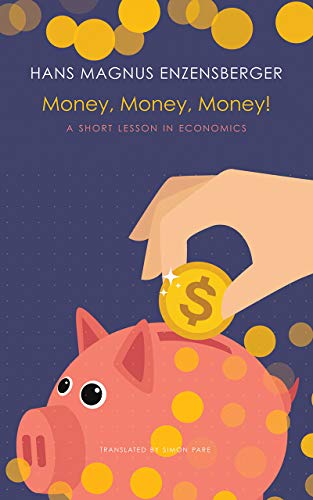 The Federmanns live a pleasant but painfully normal life in the Munich suburbs. All that the three children really know about money is that there's never enough of it in their family.

Every so often, their impish Great-Aunt Fe descends on the city. After repeated cycles of boom and bust, profligacy and poverty, the grand old lady has become enormously wealthy and lives alone in a villa on the shore of Lake Geneva. But what does Great-Aunt Fe want from the Federmanns, her only surviving relatives? This time, she invites the children to tea at her luxury hotel where she spoils, flummoxes, and inspires them. Dismayed at their ignorance of the financial ways of the world, she gives them a crash course in economics that piques their curiosity, unsettles their parents, and throws open a whole new world. The young Federmanns are for once taken seriously and together they try to answer burning questions: Where does money come from? Why are millionaires and billionaires never satisfied? And why are those with the most always showered with more?

In this rich volume, the renowned poet, translator, and essayist Hans Magnus Enzensberger turns his gimlet eye on the mechanisms and machinations of banks and politicians--the human greed, envy, and fear that fuels the global economy. A modern, but moral-less fable, Money, Money, Money! is shot through with Enzensberger's trademark erudition, wit, and humanist desire to cut through jargon and forearm his readers against obscurantism.

Hans Magnus Enzensberger, often considered Germany's most important living poet, is also the editor of the book series Die Andere Bibliothek and the founder of the monthly TransAtlantik. Seagull Books has published many of his books, including, most recently, Tumult, Panopticon, and Anarchy's Brief Summer. Simon Pare is a translator from French and German living near Zurich.

GOR010867544
Money, Money, Money!: A Short Lesson in Economics by Hans Magnus Enzensberger
Hans Magnus Enzensberger
German List
Used - Very Good
Hardback
Seagull Books London Ltd
2020-08-07
184
0857427342
9780857427342
N/A
Book picture is for illustrative purposes only, actual binding, cover or edition may vary.
This is a used book - there is no escaping the fact it has been read by someone else and it will show signs of wear and previous use. Overall we expect it to be in very good condition, but if you are not entirely satisfied please get in touch with us.