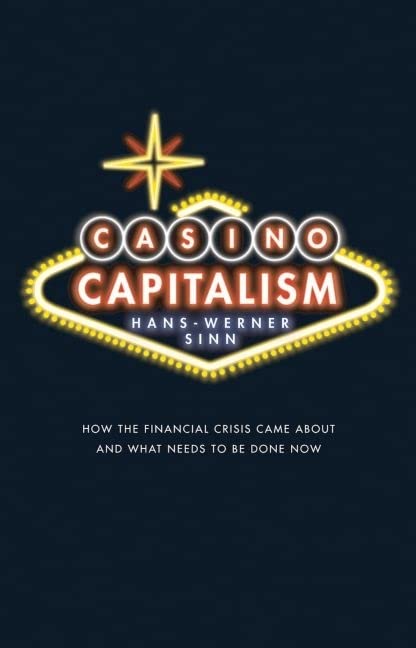 Out of Stock
$28.49
inc. GST
An English translation of Professor Sinn's bestselling Kasino-Kapitalismus, that provides an account of the origins of the recent financial crisis. The volume examines the causes of the crisis, points out the flaws in the economic rescue packages, and presents a master plan for the reform of financial markets.
Very Good
Only 0 left

Casino Capitalism: How the Financial Crisis Came About and What Needs to be Done Now by Hans-Werner Sinn (Professor of Economics and Public Finance, University of Munich, and President of Ifo Institute for Economic Research, Munich, Germany.)

In Casino Capitalism Hans-Werner Sinn examines the causes of the banking crisis, points out the flaws in the economic rescue packages, and presents a master plan for the reform of financial markets. Sinn argues that the crisis came about because limited liability induced both Wall Street and Main Street to gamble with real estate properties. He meticulously describes the process of lending to American homeowners and criticizes both the process of securitizing and selling mortgage claims to the world, as well as the poor job rating agencies did in providing transparency. He argues that the American Dream has ended because the world now realizes that this dream was built on loans that are never likely to be repaid. Sinn also asserts that the banking crisis has not yet been resolved, because the necessary write-offs of toxic assets have largely been swept under the carpet. Comparing actual worldwide write-offs with those estimated by the IMF estimates, he concludes that substantial parts, if not most, of the true losses have yet to be revealed and that the banking systems of many countries are on the brink of insolvency. In view of this, he directs sharp criticism at the various economic rescue packages, arguing that the plans assume that banks have a liquidity problem while, in fact, they suffer from a solvency crisis. Sinn points out that the conflict between the goals of rescuing banks in the short term and inducing more prudent behaviour in the long term requires the government to help the banks, but not their shareholders, by becoming a temporary co-owner. In addition, he calls for higher equity requirements, a worldwide return to more cautious accounting methods, a ban on extremely speculative short selling, and strict regulations on conduits, hedge funds and credit default swaps. This authoritative account provides an invaluable overview for academics, students, policymakers, politicians, and all those with an interest in the unprecedented 2008 banking crisis.

an excellent point of reference. * Nick Taylor, London School of Economics Review of Books *
An entertaining and provocative book. * David Laidler, Professor of Economics, University of Western Ontario *
Highly recommended * Barry Eichengreen, Professor of Economics, University of Berkeley *
Praise for the German edition: A factually rich and clearly structured analysis * FAZ, Gerald Braunberger *
Sinn's analysis is the most readable and best (popular science) account of the financial crisis that has yet appeared * Sebastian Dullien, Financial Times *
One of the best books I've seen on the financial crisis. It is engagingly written and stands out for its precision and exceptional analytical depth. * Jean-Claude Trichet, President, European Central Bank *
This book is as gripping as a thriller and provides meticulous analysis instead of moralizing appeals. Recommended for everyone who wishes to understand the financial crisis and its consequences. * Clemens Fuest, Professor of Economics, Oxford University, Chairman of German Finance Ministry Advisory Committee *
There are bad and good books on the financial crisis. And there is Hans-Werner Sinn's book, by far the best book on the subject - a book one wishes to have written oneself. * Wolfgang Wiegard, Professor of Economics, Member of the German Council of Economic Advisors *
Sinn proves again his deep and subtle expertise in global financial economics, which has contributed to his ranking among the most reputable economists of our times. * Andre Horovitz, Investment Banker *
It is a highly enjoyable read: warmly recommended not only for economists! * Reint Gropp, Professor of Economics, Business School Oestrich-Winkel *

About Hans-Werner Sinn (Professor of Economics and Public Finance, University of Munich, and President of Ifo Institute for Economic Research, Munich, Germany.)

Hans-Werner Sinn is Chair of Economics and Public Finance at the University of Munich and President of the combined Institute for Economic Research and Center for Economic Studies (CES-ifo). He has published numerous scholarly journals and books but is also a leading commentator on contemporary economic affairs in Germany and has published a number of best selling books.