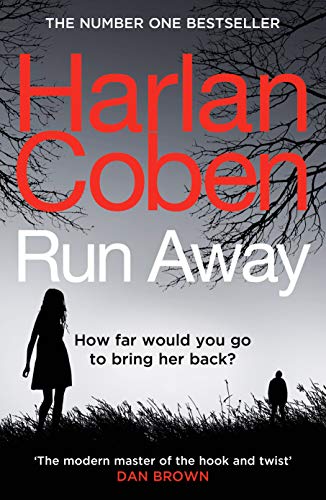 Run Away
by Harlan Coben

Run Away: The Sunday Times Number One bestseller by Harlan Coben

"Run Away confirms one of the world's finest thriller writers is at the very top of his game." PETER JAMES "Coben never, ever lets you down - but this one is really special." LEE CHILD ______________________ YOUR DAUGHTER IS MISSING. YOU'LL RISK ANYTHING TO FIND HER. And then you see her, frightened and clearly in trouble. You approach her, beg her to come home. SHE RUNS. You follow her into a dark, dangerous world where no-one is safe and murder is commonplace. NOW IT'S YOUR LIFE ON THE LINE... ______________________ "The modern master of the hook and twist" DAN BROWN "A twisty thriller that'll keep you up way past any sensible lights out time" HEAT "The king of twisty thrillers returns. This is worth turning off your phone for!" CLOSER "Another perfect domestic thriller from Harlan Coben, who makes the art of the thrill and suspense look so deceptively easy... This new novel sees him at his very best... So satisfying" CRIMETIME "[Coben's] writing and storytelling are firing on all cylinders and the seemingly straightforward tale takes a sharp turn when it's least expected" DAILY MAIL "Run Away is Harlan Coben at the height of his narrative mastery... as a thriller it's a narcotic... unmissable." SHOTS MAGAZINE "The award-winning Coben once again gets his hook into you and twists to keep you snared." RTE GUIDE "Few of Harlan Coben's thrillers are anything less than gripping, but every now and again he writes one that exceeds his own high standards. Run Away is one." THE TIMES ONLINE "A twisty, disturbing and poignant thriller" WOMAN

"A twisty thriller that'll keep you up way past any sensible lights out time *****." * Heat *
"Run Away confirms one of the world's finest thriller writers is at the very top of his game." -- Peter James
"Coben never, ever lets you down - but this one is really special." -- Lee Child
"The plot is stuffed with spicy, sharply observed characters and snappy exchanges." * Sunday Times *
"With Run Away, Coben's writing and storytelling are firing on all cylinders." * Daily Mail *

With more than seventy million books in print worldwide, Harlan Coben is the worldwide number 1 bestselling author of numerous thrillers, including Don't Let Go, Home, and Fool Me Once, as well as the multi-award-winning Myron Bolitar series. His books are published in forty-three languages around the globe and are bestsellers in more than a dozen countries. Coben is also the creator and executive producer of many television shows, including the forthcoming Netflix Original drama Harlan Coben's The Stranger starring Richard Armitage, Stephen Rea and Jennifer Saunders and the critically acclaimed Netflix Original drama Harlan Coben's Safe starring Michael C. Hall. Coben is currently developing 14 projects, including Run Away, with Netflix in the US and internationally. He lives in New Jersey.

GOR009715089
Run Away: The Sunday Times Number One bestseller by Harlan Coben
Harlan Coben
Used - Very Good
Hardback
Cornerstone
2019-03-21
384
1780894252
9781780894256
N/A
Book picture is for illustrative purposes only, actual binding, cover or edition may vary.
The book has been read, but looks new. The book cover has no visible wear, and the dust jacket is included if applicable. No missing or damaged pages, no tears, possible very minimal creasing, no underlining or highlighting of text, and no writing in the margins.