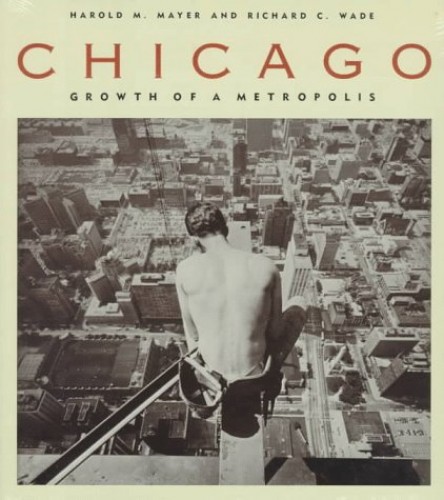 Chicago: Growth of a Metropolis by Harold M. Mayer

This is the story of Chicago and how it grew. In a little over a century it rose from a mere frontier outpost to become one of the great cities of the world. No single book can possibly encompass the immense scope of this development or convey the endless diversity of the life of Chicago's people. But with the help of the camera it is possible to capture many dimensions of this extraordinary story.

This volume, however, which comprises over 1,000 pictures and 50 maps, tries to do more than show physical development--it attempts to suggest how the city expanded and why it looks the way it does. Because it asks different questions, this book differs markedly from other "pictorial histories" of American cities. Instead of emphasizing society and customs, this volume deals with the physical conditions of life. In place of the conventional interest in "founding fathers" and leading families, it is more concerned with street scenes and ordinary people. Without neglecting downtown, it also reaches into the residential areas and neighborhood shopping centers. Moreover, this volume is concerned with suburbs and "satellite" towns as well as the historic city.

"Chicago: Growth of a Metropolis is an incredible book. Like its subject it is excessive, and nothing succeeds like excess. It is handsomely designed, with a thousand photographs that document the physical growth and the spatial patterns of the city. . . . A dimensionalism comes through that no other city has. Carl Sandburg sang it in his poetry, and the book does more to grasp it . . . than any other book I have seen."--Hugh Newell Jacobson, New Republic

GOR001990672
Chicago: Growth of a Metropolis by Harold M. Mayer
Harold M. Mayer
Used - Very Good
Paperback
The University of Chicago Press
1973-05-01
522
0226512746
9780226512747
N/A
Book picture is for illustrative purposes only, actual binding, cover or edition may vary.
This is a used book - there is no escaping the fact it has been read by someone else and it will show signs of wear and previous use. Overall we expect it to be in very good condition, but if you are not entirely satisfied please get in touch with us.