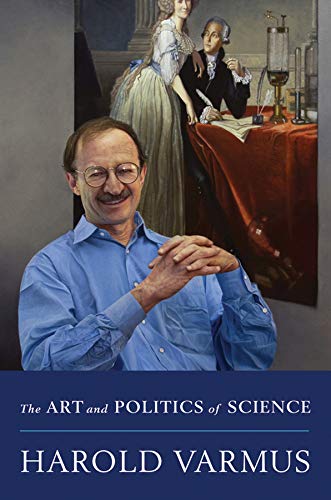 The Art and Politics of Science
by Harold Varmus

Out of Stock
$16.49
inc. GST
A Nobel Prize-winning cancer biologist, leader of major scientific institutions, and veteran of science policy wars reflects on his remarkable career.
Like New
Only 0 left

The Art and Politics of Science Summary

The Art and Politics of Science by Harold Varmus

Jeffrey Sachs has called Harold Varmus a "global scientist-statesman who bridges science and society to solve the weightiest global challenges." But as readers will learn in this engaging memoir chronicling one man's series of remarkable careers, as well as some of the central health-policy issues of our time, Varmus didn't decide that he was drawn to medicine until he was one year into a PhD in English literature! Changing course in characteristically adventurous fashion, Varmus dove headfirst into medical school, shifted shortly after graduating from practice to research, and soon found himself at the forefront of cancer research at the University of California, San Francisco, on his way toward a Nobel Prize in Medicine.

In 1993, Varmus transformed from an academic scientist to a political one when President Clinton asked him to direct the National Institutes of Health. After six years at the NIH, he took the reins as president of the world-renowned Memorial Sloan-Kettering Cancer Center, a position he still holds. Along the way, Varmus has continued his own laboratory work, remains committed to collaborative science, and still finds time to ride his bike to work.

Beyond the elegant combination of science and biography, this is a book about health issues of truly global importance. Varmus's work on cancer-causing genes foreshadowed the development of the recent targeted therapies for cancer. At the NIH, he not only persuaded Congress to commit record funds to national health programs but also turned attention to international concerns like the worldwide malaria crisis. And, as he discusses in these pages, he has long been an enthusiastic yet nuanced supporter of stem cell research. The Art and Politics of Science is a glimpse into the world of high-stakes, big-budget science narrated by a man intimately acquainted with its everyday applications-an education for people in all walks of life from a scientist whose own research and professional commitments helped to shape our scientific age.

The Art and Politics of Science Reviews

"An engaging read, fascinating as a memoir of Varmus's personal and scientific journeys, revealing in its account of his stewardship of the NIH. The book is like the man-honest and clear-eyed, thoughtful and outspoken, always good company, with more than a frequent touch of humour and self-deprecation." -- Scientific American
"[A] perceptive book about science and its civic value, arriving as the White House renews its acquaintance with empiricism. Varmus recounts his laboratory career and tenure as director of the National Institutes of Health, then surveys topical issues like stem-cell research. One implication of this book is that far from disconnecting politics and science, we should find better ways of linking them." -- Peter Dizikes - The New York Times
"Varmus offers a plain-spoken and fascinating story of his path from graduate student in English literature to the forefront of biomedical research. His journey to the highest echelons of the scientific establishment is as interesting for its incidental details as for its glimpse into the process of modern biomedical science." -- Seth Shulman - The Washington Post

Harold Varmus, director of the National Cancer Institute and president of Memorial Sloan-Kettering Cancer Center, lives with his wife, Constance Casey, and their two sons in New York City.

GOR010391256
The Art and Politics of Science by Harold Varmus
Harold Varmus
Used - Like New
Hardback
WW Norton & Co
2009-03-13
256
0393061280
9780393061284
N/A
Book picture is for illustrative purposes only, actual binding, cover or edition may vary.
The book has been read, but looks new. The book cover has no visible wear, and the dust jacket is included if applicable. No missing or damaged pages, no tears, possible very minimal creasing, no underlining or highlighting of text, and no writing in the margins.