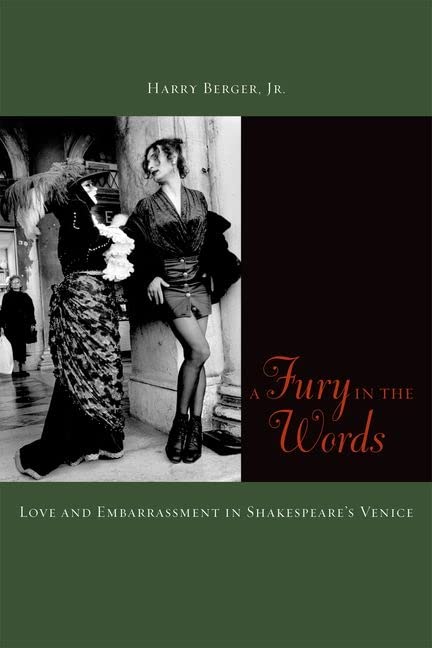 A Fury in the Words
by Harry Berger

In Stock
$21.99
+10% GST
Discusses embarrassment not merely as a condition but as a weapon and as the wound the weapon inflicts
Good
Only 1 left

A Fury in the Words Summary

A Fury in the Words: Love and Embarrassment in Shakespeare's Venice by Harry Berger

To embarrass is to make someone feel awkward or uncomfortable, humiliated or ashamed. Such feelings may respond to specific acts of criticism, blame, or accusation. "To embarrass" is literally to "embar": to put up a barrier or deny access. The bar of embarrassment may be raised by unpleasant experiences. It may also be raised when people are denied access to things, persons, and states of being they desire or to which they feel entitled.

The Venetian plays represent embarrassment not merely as a condition but as a weapon and as the wound the weapon inflicts. Characters in The Merchant of Venice and Othello devote their energies to embarrassing one another. But even when the weapon is sheathed, it makes its presence felt, as when Desdemona means to praise Othello and express her love for him: "I saw Othello's visage in his mind" (1.3.253). This suggests, among other things, that she didn't see it in his face.

A Fury in the Words Reviews

One of the great masters of close reading in the history of modern Shakespeare criticism, Harry Berger Jr., has finally published his double interpretations of The Merchant of Venice and Othello as A Fury in the Words: Love and Embarrassment in Shakespeare's Venice...[Berger], like others reviewed in this section, demonstrate close reading as itself a gift, an act of mutually enriching exchange between scholar and text in a play of benefits that moves outwards to new readers. * -Julia Reinhard Lupton, Studies in English Literature (Recent Studies in Tudor and Stuart Drama) *

The energy, penetration, and inventiveness of Berger's thought in
this book are astonishing. Embarrasment has rarely seemed so
dangerous a thing. By myriad directions and indirections he leads the
reader back into the surprise and the strangeness of the Venetian
plays, and of Shakespeare's mind at large. A masterwork.

-- -Kenneth Gross * author of Shylock is Shakespeare and Puppet: An Essay on Uncanny Life *
"A Fury in the Words shows Berger's sophisticated conceptual framework and intensive close readings in their most lucid, accessible, and human form. Berger's analysis takes us slowly, step by step, deep into the inner logic of the characters' language and helps us to make rigorous sense of the psychological motivation their words imply." -- -Peter Erickson * Northwestern University *
The great benefit of Berger's juxtaposition of 'Merchant' and 'Othello' is to highlight the contrast between Portia-Bassanio and Othello-Desdemona relationships. -- Peter Erickson * -Shakespeare Quarterly *

Harry Berger, Jr., is Professor Emeritus of Literature and Art History at the University of California, Santa Cruz. His most recent books include Figures of a Changing World: Metaphor and the Emergence of Modern Culture and A Fury in the Words: Love and Embarrassment in Shakespeare's Venice (both Fordham).

GOR010088633
A Fury in the Words: Love and Embarrassment in Shakespeare's Venice by Harry Berger
Harry Berger
Used - Good
Paperback
Fordham University Press
2012-11-14
240
0823241955
9780823241958
N/A
Book picture is for illustrative purposes only, actual binding, cover or edition may vary.
This is a used book - there is no escaping the fact it has been read by someone else and it will show signs of wear and previous use. Overall we expect it to be in very good condition, but if you are not entirely satisfied please get in touch with us.