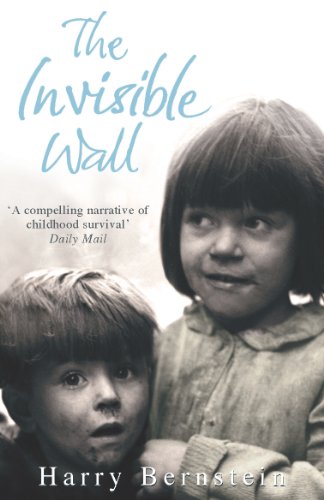 The Invisible Wall
by Harry Bernstein

In Stock
$10.49
+10% GST
Harry Bernstein was born into a world of hardship and suffering in a northern mill town, in the shadow of the First World War.
Very Good Good
Only 1 left

The Invisible Wall by Harry Bernstein

Harry Bernstein was born into a world of hardship and suffering in a northern mill town, in the shadow of the First World War. His brutish father spends what little he earns at the tailoring shop on drink, while his devoted mother survives on her dreams - that new shoes might secure Harry's admission to a fancy school, that her daughter might marry well, and that one day they might all escape this grinding poverty for the paradise of America. But as the years go by, life for the Bernsteins on their narrow cobbled street remains a daily struggle to make ends meet. For young Harry though, most distressing are his fears for his adored elder sister Lily, who is risking all by pursuing a forbidden love...

"An exceptional book" * Guardian *
"A compelling narrative of childhood survival ... the tale has a freshness, a vitality and a relentless energy ... extraordinarily powerful. The Invisible Wall is a triumph of the human spirit over multi-faceted adversity." * Daily Mail *
"Extraordinary ... spare, uncomplicated, and terribly vivid for it" * Independent *
"[A] heart-wrenching memoir ... the setting, beautifully rendered, recalls early DH Lawrence. It is a world of pain and prejudice, evoked in spare, restrained prose that brilliantly illuminates a time, a place and a family struggling valiantly to beat impossible odds. As an emotional experience and a vivid retelling of the author's past, it exerts uncommon power." * New York Times *
"A remarkable memoir ... vivid, compassionate and notably unsentimental" * Times Literary Supplement *

97-year-old Harry Bernstein emigrated to the USA with his family after the First World War. He has written all his life, but started writing THE INVISIBLE WALL following the death of his wife of 67 years, Ruby. He lives in Brick, New Jersey.

GOR001640585
The Invisible Wall by Harry Bernstein
Harry Bernstein
Used - Good
Paperback
Cornerstone
2007-11-01
336
0099504286
9780099504283
N/A
Book picture is for illustrative purposes only, actual binding, cover or edition may vary.
This is a used book - there is no escaping the fact it has been read by someone else and it will show signs of wear and previous use. Overall we expect it to be in very good condition, but if you are not entirely satisfied please get in touch with us.