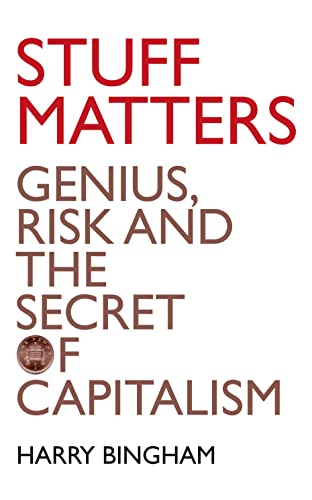 A counter-blast to the bashing of capitalism and a fresh and bold re-evaluation of the fundamentals that turn genius into hard currency.

Stuff Matters: Genius, Risk and the Secret of Capitalism by Harry Bingham

A counter-blast to the bashing of capitalism and a fresh and bold re-evaluation of the fundamentals that turn genius into hard currency.

Harry Bingham used to be an economist and a banker and thought he understood money. Then, in autumn 2008, the world stood on the edge of calamity and Harry realised that all the things he knew had been proven utterly wrong.

So, he decided to go back to first principles, to meet the people who make the money - the entrepreneurs and inventors, the salesmen and financiers. He wanted to find out how the world really worked and what drives the people who make it spin. For the first time he saw that while the economy might be about many things, it is never ever about money.

We all have strong feelings about money. It is the magic of its alchemy that has catapulted the human race from extreme poverty to our world of ever-expanding riches, but it also brings with it economic chaos. But how many of us can say what is it made really made of and how it works?

From billionaire entrepreneurs and Indian shift-workers to small-time manufacturers and conglomerate CEOs, The Root of All Good, is the story of the people who have created the world of extraordinary prosperity that we now live in, and the new system of capitalism they are shaping to recover our future.

SWEET TALKING MONEY: 'This excellent, pacy thriller is set in the hundred-billion-dollar world!the thrilling plot is underpinned with masses of convincing detail' Daily Mail 'Bingham's style is distinctively his own and his characters more rounded and credible than average' Mail on Sunday THE MONEY MAKERS: 'A thrilling grown-up fairy tale' Evening Standard 'An incredible story.' Radio 5 Live 'A fast-moving story of greed and redemption' Daily Telegraph 'A pacy, diverting romp' The Times

Harry Bingham is an ex-City trader who has worked for major British, American and Japanese firms but who now writes full time. He lives near Oxford with his wife and their three dogs.

GOR001998903
Stuff Matters: Genius, Risk and the Secret of Capitalism by Harry Bingham
Harry Bingham
Used - Very Good
Hardback
HarperCollins Publishers
2010-07-08
180
0007260172
9780007260171
N/A
Book picture is for illustrative purposes only, actual binding, cover or edition may vary.
This is a used book - there is no escaping the fact it has been read by someone else and it will show signs of wear and previous use. Overall we expect it to be in very good condition, but if you are not entirely satisfied please get in touch with us.