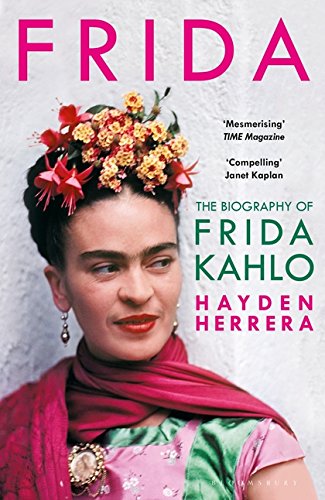 Frida: The Biography of Frida Kahlo by Hayden Herrera

A reissue of the beautifully illustrated and authoritative biography of Frida Kahlo, publishing in time for a major London exhibition Frida is the story of one of the twentieth century's most extraordinary women, the painter Frida Kahlo. Born near Mexico City, she grew up during the turbulent days of the Mexican Revolution and, at eighteen, was the victim of an accident that left her crippled and unable to bear children. To salvage what she could from her unhappy situation, Kahlo had to learn to keep still - so she began to paint. Kahlo's unique talent was to make her one of the century's most enduring artists. But her remarkable paintings were only one element of a rich and dramatic life. Frida is also the story of her tempestuous marriage to the muralist Diego Rivera, her love affairs with numerous, diverse men such as Isamu Noguchi and Leon Trotsky, her involvement with the Communist Party, her absorption in Mexican folklore and culture, and of the inspiration behind her unforgettable art.

Hayden Herrera has succeeded admirably in cutting through the myths to offer a plausible likeness of this wretched, glorious woman * Independent *
Frida will hold its place as the first comprehensive biography of this most visceral of artists * Observer *
Mesmerizing * TIME Magazine *
Herrera presents intimate descriptions of Kahlo's sensuous and fiery nature, and discusses Kahlo's paintings with expert critical skill -- Janet Kaplan

HAYDEN HERRERA is an art historian and biographer. She has lectured widely, curated several exhibitions of art, taught Latin American art at New York University, and has been awarded a Guggenheim Fellowship. She is the author of numerous articles and reviews for such publications as Art in America, Art Forum, Connoisseur, and the New York Times, among others. Her books include Mary Frank; Matisse: A Portrait; Frida: A Biography of Frida Kahlo; Frida Kahlo: The Paintings; Arshile Gorky: His Life and Work, which was nominated for the Pulitzer Prize; and Listening to Stone: The Art and Life of Isamu Noguchi, which won the Los Angeles Book Prize for Biography. She lives in New York City.

GOR009556241
Frida: The Biography of Frida Kahlo by Hayden Herrera
Hayden Herrera
Used - Very Good
Paperback
Bloomsbury Publishing PLC
2018-06-28
528
1526605317
9781526605313
N/A
Book picture is for illustrative purposes only, actual binding, cover or edition may vary.
This is a used book - there is no escaping the fact it has been read by someone else and it will show signs of wear and previous use. Overall we expect it to be in very good condition, but if you are not entirely satisfied please get in touch with us.