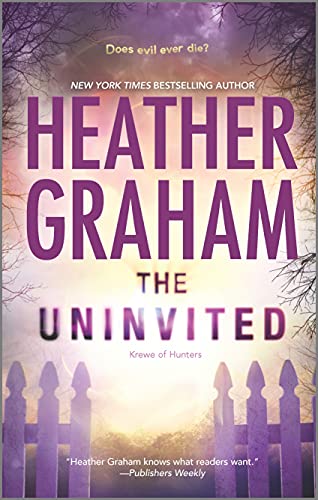 The Uninvited
by Heather Graham

Used Price
$51.99
inc. GST
Free Shipping in Australia
More than 200 years after a murder in the historic Landon Mansion in Philadelphia, docent Allison Leigh discovers the body of a colleague impaled on his own replica bayonet. Agent Tyler Montague knows his hauntings and his history. But while Allison is skeptical of the newcomer, a second mysterious murder occurs. Has "Butcher" Bedford resurfaced? Original.
Reviews:
Trustpilot
Very Good

The Uninvited by Heather Graham

1777: In the throes of the Revolutionary War, Landon Mansion is commandeered by British Lord "Butcher" Bedford. He stabs Lucy Tarleton--who spurned his king and his love--leaving her to die in her father's arms.

NOW: After the day's final tour, docent Allison Leigh makes her rounds while locking up...and finds a colleague slumped over Bedford's desk, impaled on his own replica bayonet.

Resident ghosts may be the stock-in-trade of stately Philadelphia homes, but Allison--a noted historian--is indignant at the prospect of "ghost hunters" investigating this apparent murder.

Agent Tyler Montague knows his hauntings and his history. But while Allison is skeptical of the newcomer, a second mysterious murder occurs. Has "Butcher" Bedford resurfaced? Or is there another malevolent force at work in Landon Mansion? Wary, yet deeply attracted, Allison has to trust in Tyler and work with him to discover just what uninvited guest--dead or alive--has taken over the house.

Or their lives could become history!

"Graham...stands at the top of the romantic suspense category. -Publishers Weekly

"Graham expertly blends a chilling history of the mansion's former residents with eerie phenomena, once again demonstrating why she stands at the top of the romantic suspense category." --Publisher's Weekly on Phantom Evil, Starred Review

"A fast-paced and suspenseful read that will give readers chills while keeping them guessing until the end."
-RT Book Reviews on Ghost Moon

"If you like mixing a bit of the creepy with a dash of sinister and spine-chilling reading with your romance, be sure to read Heather Graham's latest...Graham does a great job of blending just a bit of paranormal with real, human evil."
-Miami Herald on Unhallowed Ground

"Heather Graham will keep you in suspense until the very end."
-Literary Times

"Mystery, sex, paranormal events. What's not to love?"
-Kirkus on The Death Dealer

"The paranormal elements are integral to the
unrelentingly suspenseful plot, the characters
are likable, the romance convincing, and, in the
wake of Hurricane Katrina, Graham's atmospheric
depiction of a lost city is especially poignant."
-Booklist on Ghost Walk

"Graham's rich, balanced thriller sizzles with equal parts suspense, romance and the paranormal-all of it nail-biting."
-Publishers Weekly on The Vision

"New York Times" and "USA Today" bestselling author Heather Graham has written more than a hundred novels. She's a winner of the RWA's Lifetime Achievement Award, and the Thriller Writers' Silver Bullet. She is an active member of International Thriller Writers and Mystery Writers of America. For more information, check out her websites: TheOriginalHeatherGraham.com, eHeatherGraham.com, and HeatherGraham.tv. You can also find Heather on Facebook.

GOR004596897
The Uninvited by Heather Graham
Heather Graham
Krewe of Hunters
Used - Very Good
Paperback
Unknown
0
0778313700
9780778313700
N/A
Book picture is for illustrative purposes only, actual binding, cover or edition may vary.
This is a used book - there is no escaping the fact it has been read by someone else and it will show signs of wear and previous use. Overall we expect it to be in very good condition, but if you are not entirely satisfied please get in touch with us.