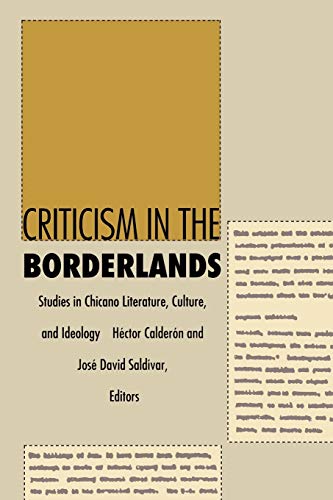 Criticism in the Borderlands by Hector Calderon

Presents an anthology of Chicano literary criticism, with essays on a range of texts - both old and new - that draws on diverse perspectives in contemporary literary and cultural studies: from ethnographic to postmodernist, from Marxist to feminist, from cultural materialist to new historicist.

Criticism in the Borderlands: Studies in Chicano Literature, Culture, and Ideology by Hector Calderon

This pathbreaking anthology of Chicano literary criticism, with essays on a remarkable range of texts-both old and new-draws on diverse perspectives in contemporary literary and cultural studies: from ethnographic to postmodernist, from Marxist to feminist, from cultural materialist to new historicist.
The editors have organized essays around four board themes: the situation of Chicano literary studies within American literary history and debates about the canon; representations of the Chicana/o subject; genre, ideology, and history; and the aesthetics of Chicano literature. The volume as a whole aims at generating new ways of understanding what counts as culture and theory and who counts as a theorist. A selected and annotated bibliography of contemporary Chicano literary criticism is also included.
By recovering neglected authors and texts and introducing readers to an emergent Chicano canon, by introducing new perspectives on American literary history, ethnicity, gender, culture, and the literary process itself, Criticism in the Borderlands is an agenda-setting collection that moves beyond previous scholarship to open up the field of Chicano literary studies and to define anew what is American literature.