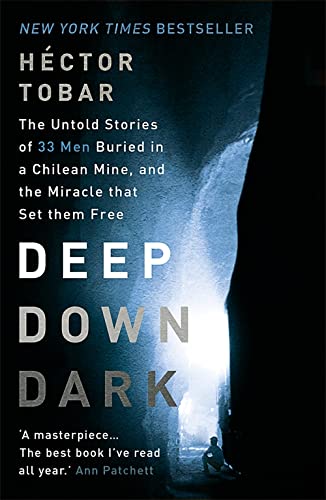 Deep Down Dark: The Untold Stories of 33 Men Buried in a Chilean Mine, and the Miracle that Set them Free by Hector Tobar

A dramatic account of the 33 miners of the San Jose mine in Chile by novelist and Pulitzer Prize-winning journalist Hector Tobar, in official collaboration with 'The 33' and with the full cooperation of the Chilean authorities behind the daring rescue operation.

Deep Down Dark: The Untold Stories of 33 Men Buried in a Chilean Mine, and the Miracle that Set them Free by Hector Tobar

A NEW YORK TIMES BOOK OF THE YEAR

'An astonishing tale of survival' Spectator

THE STORY THAT GRIPPED THE GLOBE

August 2010: the San Jose mine in Chile collapses trapping 33 men half a mile underground for 69 days.
Faced with the possibility of starvation and even death, the miners make a pact: if they survive, they will only share their story collectively, as 'the 33'.
1 billion people watch the international rescue mission.
Somehow, all 33 men make it out alive, in one of the most daring and dramatic rescue efforts even seen.
Pulitzer-prize-winning journalist Hector Tobar is the man they choose to tell their story.

' An eloquent testament to the human spirit' The Times

'A masterful account of exile and human longing, of triumph in the face of all odds.'
Los Angeles Times


. . . an eloquent testament to the human spirit. * The Times *
Riveting . . . The best book I've read all year. * Ann Patchett *
Riveting... Tobar vividly narrates the miners' lives post-rescue as they come to terms with their life-changing experience and the media frenzy surrounding it. Rich in local color, this is a sensitive, suspenseful rendering of a legendary story. * Publishers Weekly, Most Anticipated Books of 2014 *
..fascinating... (The ) narrative cracks along at a suitably breathless pace * Irish Mail *
Hector Tobar takes us so far down into the story and lives of the Chilean miners that his reconstruction of a workplace disaster becomes a riveting meditation on universal human themes.Deep Down Dark is an extraordinary piece of work. * George Packer *
In this masterful dissection of the 2010's dramatic sixty-nine day ordeal by thirty-three trapped Chilean miners, Hector Tobar weaves a suspenseful narrative that moves back and forth between the waking nightmares of the buried men, and those of their families on the earth's surface. In Deep Down Dark, Hector Tobar takes us deftly to the very cliff-edge of human survival. * Jon Lee Anderson *
It's almost hard to believe that Hector Tobar wasn't himself one of the trapped Chilean miners, so vivid, immediate, terrifying, emotional, and convincing is his Homeric narration of this extraordinary incident. Deep Down Dark is a literary masterpiece of narrative journalism, surgical in its reconstruction, novelistic in its explorations of human personality and nuance. In a manner that feels spiritual, Tobar puts himself at the service of his story, and his fidelity to and unquenchable curiosity about every fact and detail generates unforgettable wonderment and awe. * Francisco Goldman *
A gripping narrative, taut to the point of explosion . . . An electrifying, empathetic work of journalism that makes a four-year-old story feel fresh. * Kirkus *

Hector Tobar is the son of Guatemalan immigrants and a native of the city of Los Angeles. He is the former Buenos Aires and Mexico City Bureau Chief for the LA Times and shared a Pulitzer for the paper`s coverage of the 1992 riots. He is currently an LA-based columnist for the paper. He is the author of the critically acclaimed novel, The Barbarian Nurseries.

GOR006834427
9781444755411
1444755412
Deep Down Dark: The Untold Stories of 33 Men Buried in a Chilean Mine, and the Miracle that Set them Free by Hector Tobar
Hector Tobar
Used - Very Good
Paperback
Hodder & Stoughton General Division
2015-06-18
320
N/A
Book picture is for illustrative purposes only, actual binding, cover or edition may vary.
This is a used book - there is no escaping the fact it has been read by someone else and it will show signs of wear and previous use. Overall we expect it to be in very good condition, but if you are not entirely satisfied please get in touch with us
Trustpilot