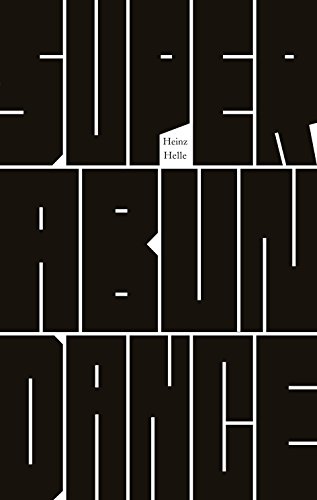 Alone in New York, separated from his girlfriend by the Atlantic Ocean, the name-less narrator of Heinz Helle's electric debut novel is sinking slowly into crisis. He loves his girlfriend but finds himself attracted to every woman he sees. He is cursed with total self-awareness yet can't seem to control his actions. And his brain won't stop its whirring analysis of the world around him, second-guessing everything he thinks and says and does. Normal life - watching football with friends, drinking with work colleagues, being with his girlfriend - is becoming almost impossible to bear. As the narrator struggles with the everyday difficulties of existence, Superabundance asks: how do we live when our relationships, our actions and even our own minds are filled with such heartbreaking mystery?

[A] philosophical tour de force ... which aptly showcases Helle's deadpan humour. This is a linguistically daring portrait of an overwhelmed mind * Financial Times *
Fragmentary prose is welded by a hypnotic voice ... the unnamed narrator of Heinz Helle's debut describes his life in New York with remorseless logic * Guardian *
Darkly humorous ... Helle shows us the world with a rare clear-sightedness * Scotland on Sunday *
Beckettian ... excellent ... funny * Independent *
Superabundance is a work of deadpan brilliance and unflinching honesty, chasing down lines of thought normally lost in the cacophony of our daily lives. I had always assumed I was fully conscious until I read this -- Alex Christofi, author of 'Glass'
A nearly flawless, driving history of total alienation * Die Zeit *
So modern, so cool, so strange -- Hubert Winkels

Heinz Helle was born in 1978. He studied philosophy in Munich and New York. He has worked as copywriter for advertising agencies, and is a graduate of the Swiss Literature Institute in Biel. Superabundance is his first book.

GOR009316833
Superabundance by Heinz Helle
Heinz Helle
Used - Very Good
Paperback
Profile Books Ltd
2017-02-02
160
178125396X
9781781253960
N/A
Book picture is for illustrative purposes only, actual binding, cover or edition may vary.
This is a used book - there is no escaping the fact it has been read by someone else and it will show signs of wear and previous use. Overall we expect it to be in very good condition, but if you are not entirely satisfied please get in touch with us.