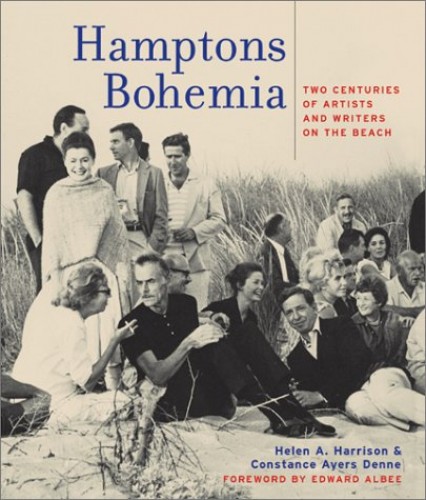 Hamptons Bohemia
by Helen A. Harrison

Out of Stock
$103.99
inc. GST
Richly illustrated with archival photos and reproductions of the artists' work, "Hamptons Bohemia" chronicles the evolution of a community and the colorful characters who have inhabited it, from Winslow Homer to George Plimpton. 176 full-color and halftone images.
Like New
Only 0 left

Hamptons Bohemia: The Artists and Writers of America's Most Celebrated Creative Community by Helen A. Harrison

Hamptons Bohemia is the first book to profile, in words and pictures, the loose-knit, fertile confederation of artists and writers that has thrived on Long Island's South Fork since the mid-nineteenth century. The Hamptons, renowned for its summer population of media celebrities and stock market millionaires, is also home to a vibrant artists' and writers' colony. The proximity to New York City, an idyllic setting, and the at-one-time reasonable real estate prices, the Hamptons have attracted some of the world's best-known artists and writers of the last century, including Winslow Homer, Walt Whitman, Jackson Pollock, and Wendy Wasserstein. The book describes the evolution of the community and the colourful characters who inhabit it. Filled with stories, archival photos, and full-colour reproductions of the artists' work, the book also features sidebars giving detailed information and in-depth anecdotes about key people, places, and events - for example, the famed annual artists and writers softball game. In addition, readers can sample the work of some of the Hamptons' best-known writers in the form of letters, short stories, poems, and excerpts from longer works. An intelligent, beautifully illustrated ode to a unique community.

"The Hamptons." Ugh, that term. There can be few parts of the world more freighted with pejorative associations so contrary to the tru character of the place itself.
The term is shorthand for Southampton, Bridgehampton and East Hampton, three towns on Long Island some 150 miles east of Manhattan, but it takes in the entire "South Fork," from Southampton all the way to Montauk on the island's easternmost tip, including villages with names like Sagaponack, Amagansett and the Springs.
What you will find there is extraordinary beauty - blissful vistas across rolling fields, acres of ocean under an enormous dome of sky, beaches that meander out of sight in every direction, the rhythmic churn of water, a lustrous, all-pervading light. In the Hamptons, nature is the star attraction, the first reason for the summer's outrush of urbanites to the farther reaches of Long Island.
Alas you will also find something else there. "The Hamptons" has long been shorthand for consumption of Napoleonic extravagance, preening celebrity and a genral order of behavior that rises, at best, to narcissistic self-centeredness and bottoms out at brazen depravity. Last summer, the big story was Lizzie Grubman's contretemps outside a trendy bar in Southampton, when she allegedly mowed down several revelers with her SUV in a haughty temper tantrum. Now that another summer is upon us, we can doubtless look forward to more bad behavior.
Which is why it's good to have "Hamptons Bohemia," an engaging, and wonderfully illustrated, narrative of "artists and writers on the beach, ' as the subtitle has it. Art historian Helen Harrison and English Prof. Constance Ayers Denne reclaim the Hamptons from "The Hamptons" by reminding us that part of the original attraction of this region, as early as the 18th century, was that it offered a place for serious people to escape the city and explore nature or their inner selves, or both, in relative peace.

The artist most often associated with the place is Jackson Pollock, the abstract expressionist painter who moved out to the Hamptons in 1945 and was killed 11 years later when the car he was driving in an alcohol-fueled fury veered off the road and into a tree. In point of fact, the roster of Hamptons artists is long and distinguished. It includes Winslow Homer, William Merritt Chase, Thomas Moran and, not least, Childe Hassam, whose famous beachscapes capture the dignified calm of the Hamptons shore early in the 20th century.
Willem de Kooning came out soon after Pollock, to be followed by Fairfield Porter, Andy Warhol and the shooting stars of the 1980s art boom, like Julian Schnabel and Ross Bleckner. Among the writers who have been drawn to the place are Melville, Whitman, James Fenimore Cooper, Ring Lardner, John Steinbeck and Edward Albee. Up to and during the rise of Sag Harbor as a whaling port in the late 18th century, art in the Hamptons consisted mainly of portraiture. Artists only began to turn their eyes to nature once the whaling industry declined a half-century later and the worthies could no longer afford their services. A half-century after that, in 1891, William Merritt Chase opened the Shinnecock Summer School to teach plein-air painting - that is, painting that starts and finishes outdoors, in a manner of the French Impressionists, rather than being composed in the studio from outdoor sketches.
Chase would never have started his school were it not for the advent of the railroad, which pushed along the Hamptons' rise as both a avacation retreat and an artists' colony. The first rail line opened in 1874, running only as far as Bridgehampton. Twenty years later it was exteded all the way to Montauk, thus ending the South Fork's relative isolation. A trip from New York that had once taken four days by coach and horses could not be done in a day.
Nature long informed the art that was made there, and not only Childe Hassam's or that of Chase and his school. After moving to the Sp

About Helen A. Harrison

Helen A. Harrison is an art historian, art critic for the New York Times, and director of the Pollock-Krasner House and Study Center in East Hampton, New York. A resident of Sag Harbor, New York, she has lectured and published widely on 20th-century Americ
Constance Ayers Denne a Professor of English at Baruch College, CUNY, is a leading authority on the work of James Fenimore Cooper. Her book reviews, lectures, books, articles, and other literary endeavors have earned acclaim in the United States and abroad
Edward Albee, the renowned playwright and winner of three Pulitzer Prizes, is a longtime resident of Montauk, New York.

GOR010396060
Hamptons Bohemia: The Artists and Writers of America's Most Celebrated Creative Community by Helen A. Harrison
Helen A. Harrison
Used - Like New
Hardback
Chronicle Books
2002-05-23
178
0811833763
9780811833769
N/A
Book picture is for illustrative purposes only, actual binding, cover or edition may vary.
The book has been read, but looks new. The book cover has no visible wear, and the dust jacket is included if applicable. No missing or damaged pages, no tears, possible very minimal creasing, no underlining or highlighting of text, and no writing in the margins.