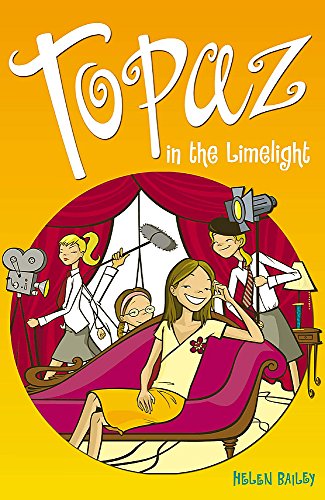 Topaz in the Limelight
by Helen Bailey

Used Price
$11.99
inc. GST
Free Shipping in Australia
The third in a sparkling new series about Topaz at the Precious Gems Stage School - a must for all would-be stars!
Reviews:
Trustpilot
Very Good

Topaz in the Limelight Summary

Topaz in the Limelight by Helen Bailey

When Topaz has a chance encounter with Madame Catovia, a fortune teller at the Starbridge Summer Festival, she ignores the prediction that she will never be a star. But when she finds herself cut out of a crowd scene despite standing next to the poisonous Octavia Quaver during filming, and only manages to get a part as a dead body in a re-make of Murder Mile, Topaz begins to wonder if Madame Catovia is right after all. Then Octavia's pushy mother Pauline is ordered off the film set and Octavia makes a strangely familiar prediction ...

Customer Reviews - Topaz in the Limelight

Helen Bailey was born and brought up in Northumberland, a county she still regards as home.

Barely into her teens, Helen invested her pocket money in buying a copy of The Writers' and Artists' Yearbook and spent the next few years sending short stories and poems to anyone she could think of. Much to her surprise, she sometimes found herself in print.

After a degree in science, Helen worked in the media and now runs a successful London-based character licensing agency handling internationally renowned properties such as Snoopy, Felicity Wishes, Dilbert and Zorro.

With her dachshund, Rufus, and her husband, she now divides her time between London and Broadstairs on the Kent coast.

GOR001967130
Topaz in the Limelight by Helen Bailey
Helen Bailey
Topaz
Used - Very Good
Paperback
Hachette Children's Group
2005-05-19
144
0340893486
9780340893487
N/A
Book picture is for illustrative purposes only, actual binding, cover or edition may vary.
This is a used book - there is no escaping the fact it has been read by someone else and it will show signs of wear and previous use. Overall we expect it to be in very good condition, but if you are not entirely satisfied please get in touch with us.