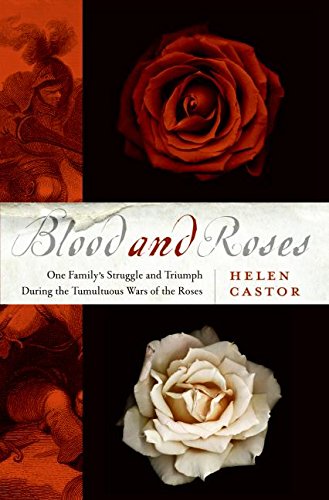 Blood and Roses by Helen Castor

Revealing the tapestry of an age, this history of one family's struggle during the War of the Roses is crafted from a rare trove of letters found in a tumbledown stately home. Two 8-page inserts, one in color.

Blood and Roses: The Paston Family in the Fifteenth Century by Helen Castor

In a span of thirty years, four kings lost their thrones, countless men lost their lives on the battlefield or their heads on the block, and others found themselves suddenly flush with gold. The Wars of the Roses tore England asunder, yet until now, almost nothing has been known about the ordinary people who lived through this extraordinary time.

Drawing on an incomparably rare trove of letters discovered in a tumbledown stately home, historian Helen Castor reconstructs the lives of the Paston family, who singlemindedly worked their way up from farmers to landed gentry. As they went about their business in a disintegrating society, the Pastons corresponded on topics ranging from politics to love, from shopping to family gossip. A wife writes her husband that she'd rather have him home than have a new gown, "even if it were scarlet." A brother reports that the handless servant, Thomas Stumps, has demanded a crossbow so that he can defend them in a siege. Five hundred years later, these voices still have the immediacy of a conversation overheard on a street corner.

Blood and Roses is a gripping and intimate biography of a family, which traces three generations of births, marriages, and deaths. Castor unravels the story of the family's tur-bulent affairs against the backdrop of civil war, bringing to vibrant life a remote and hazy era.

"Beautifully paced and splendidly retold, Castor's tale... is popular history at its best."--Publishers Weekly (starred review)
Helen Castor is a historian of medieval England and a Bye-Fellow of Sidney Sussex College, Cambridge. Her first book, Blood and Roses, was long-listed for the Samuel Johnson Prize and won the English Association's Beatrice White Prize. Her second book, She-Wolves, was selected as one of the books of the year by The Guardian, The Sunday Times, The Independent, Financial Times, and BBC History Magazine. She lives in London.
GOR011384493
9780007148080
0007148089
Blood and Roses: The Paston Family in the Fifteenth Century by Helen Castor
Helen Castor
Used - Like New
Hardback
HarperCollins Publishers
2004-08-01
426
N/A
Book picture is for illustrative purposes only, actual binding, cover or edition may vary.
The book has been read, but looks new. The book cover has no visible wear, and the dust jacket is included if applicable. No missing or damaged pages, no tears, possible very minimal creasing, no underlining or highlighting of text, and no writing in the margins
Trustpilot