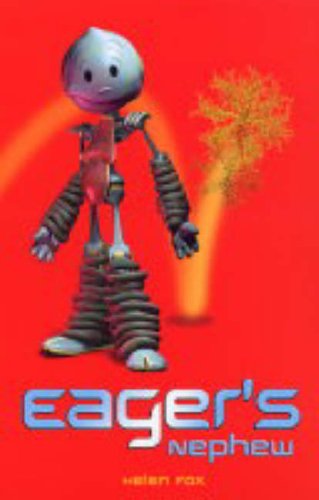 In Stock
$13.49
inc. GST
An inventive sequel to EAGER. There is a worldwide ban on developing self-aware robots for fear they will compete with humans, and Eager is in hiding. But his talents are needed to solve mysteries at the Space Factory.
Very Good
Only 2 left

Eager comes out of hiding regularly to visit his old friends, the Bell family, and with him comes his 'nephew' Jonquil, Professor Ogden's newest, and formidably intelligent invention. Jonquil is a tinselly structure that can infinitely change shape. He is impatient, curious, always wants to be in the middle of things - and quickly out of control.

Fleur Bell is now grown up, with a daughter, Ju; her old friend, Marcia has a son, Finbar. Fleur's husband works in a space station, and things take a very worrying turn when he appears not to be his usual self during his regular conversations with the family on the go-between. Before long Eager and Jonquil, with the help of Ju and Finbar, are locked into another quirky mystery adventure in search of the truth ...

To complicate matters further, for Eager the human world is even more bewildering than ever ...

I really liked this book and I would recommend it to boys and girls aged ten and over. It's an exciting story and a great read -- Andrew McGregor, aged 9 * Evening Echo (Cork) *
I liked this story because there were so many adventures going on all the time that you never got a bit bored at all -- Daniele Ryan, aged 11 * Cork Evening Echo *

Praise for EAGER:
'A terrific read, full of fascinating ideas ... Eager himself is a really engaging character.'

Helen Fox lives in London with her husband, who is a scientist. Before she became a writer she worked as a primary teacher, a marketing executive, and a tour guide. She trained and worked as an actress, and during this time rediscovered her love of creating stories. Helen has now given herself over to writing full-time. Eager was her first novel.

GOR000798114
Eager's Nephew by Helen Fox
Helen Fox
Eager
Used - Very Good
Paperback
Hachette Children's Group
2005-04-14
352
0340875852
9780340875858
N/A
Book picture is for illustrative purposes only, actual binding, cover or edition may vary.
This is a used book - there is no escaping the fact it has been read by someone else and it will show signs of wear and previous use. Overall we expect it to be in very good condition, but if you are not entirely satisfied please get in touch with us.