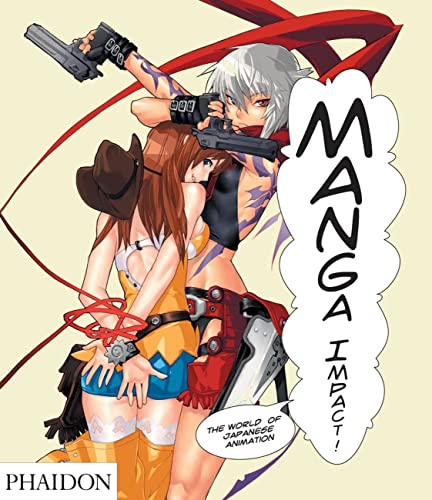 A fascinating journey through the world of anime and manga, their genres and styles, roots and creators.

Manga Impact: The World of Japanese Animation by Helen McCarthy

Manga Impact is a fascinating, informative guide to the vibrant world of Japanese comic books (manga) and animation (anime), from their most commercial manifestations to works at the cutting edge of design and production. Lavishly illustrated and beautifully designed, this book introduces 350 of the most important manga characters and their creators, with 15 original essays exploring the history and significance of the artform. It is the ultimate reference book on a diverse and original cultural phenomenon.

"Delightful comic-style book... Great for newcomers as well as aficianados."-Time Out

Philip Brophy is a musician, filmmaker, writer and academic.

Carlo Chatrian is a film critic and consultant for several film festivals.

Jonathan Clements is the author of Schoolgirl Milky Crisis: Adventures in Anime and co-author of The Anime Encyclopedia.

Jordi Costa is a film critic and author of many articles on Asian cinema.

Luca Della Casa is a selector of anime and Asian films for Bologna's Future Film Festival.

Davide Di Giorgio is a film critic and author of a Japanese animation column for the webmagazine Sentieri Selvaggi.

Daniele Dottorini is a film critic, lecturer and consultant for several film festivals.

Stefano Gariglio works in movie subtitling and is a member of the neo(N)eiga cultural association.

Erwan Higuinen is a journalist and film critic for Liberation, Cahiers du cinema and Les Inrockuptibles.

Fabrizio Modina is a multitalented creative and an internationally renowned collector of toys.

Giona A.Nazzaro is a film critic and programmer at the Festival dei Popoli, Florence.

Grazia Paganelli is a film critic and film programmer at the National Museum of Cinema, Turin.

Gianni Rondolino is an internationally renowned cinema historian and columnist for La Stampa.

Michel Roudevitch is a cartoonist, screenwriter, animator and director who has worked in the animated cinema industry since the Sixties.

Mario A. Rumor is editor of MANGA! magazine.

Stephen Sarrazin is a film and media art critic, curator and professor.

350 of the most important people in manga in alphabetical order, 15 essays and an index.

GOR005899813
Manga Impact: The World of Japanese Animation by Helen McCarthy
Helen McCarthy
Used - Very Good
Paperback
Phaidon Press Ltd
2010-10-29
296
0714857416
9780714857411
N/A
Book picture is for illustrative purposes only, actual binding, cover or edition may vary.
This is a used book - there is no escaping the fact it has been read by someone else and it will show signs of wear and previous use. Overall we expect it to be in very good condition, but if you are not entirely satisfied please get in touch with us.