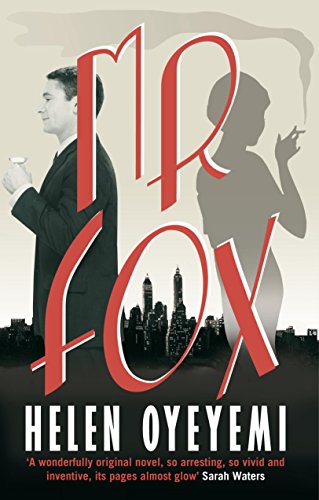 An exhilarating new direction for Helen Oyeyemi with a mischievous story of love, lies and inspiration

It's an ordinary afternoon in 1938 for the celebrated American novelist St John Fox, hard at work in the study of his suburban home - until his long-absent muse wanders in. Mary Foxe (beautiful, British and 100% imaginary) is in a playfully combative mood. "You're a villain," she tells him. `A serial killer . . . can you grasp that?"

Mr Fox has a predilection for murdering his heroines. Mary is determined to change his ways. And so she challenges him to join her in stories of their own devising, and the result is an exploration of love like no other.

It isn't long before Mrs Daphne Fox becomes suspicious, and St John is offered a choice: a life with the girl of his dreams, or a life with an all-too-real woman who delights him more than he cares to admit. Can there be a happy ending this time?

Mr Fox is a magical book, as witty as it is profound in its truths about how we learn to be with one another.

"Oyeyemi's writing is gorgeous and resonant and fresh . . . a shimmering landscape pulsating with life."--Aimee Bender, "The New York Times Book Review""Oyeyemi has an eye for the gently perverse, the odd detail that turns the ordinary marvelously, frighteningly strange."--"The Boston Globe""Dazzling."--"The Washington Post""Cheeky and imaginative."--"The New Yorker" "Startling, beautiful . . . [Mr. Fox] should not be ignored."--"Chicago Sun Times"""Mr. Fox" is a wonderfully original novel, full of images and turns of phrase so arresting, so vivid and inventive, its pages almost glow with them. Helen Oyeyemi has given us a work of playful charm and serious narrative pleasure."--Sarah Waters, author of "The Little Stranger""A sly, tender, and elegant novel, graced with a magical charm that makes this novel's wisdom about love and loss all the more captivating to read. "Mr. Fox" is a novel for those who love stories and who believe in their singular power to alter and heal our fragile souls."--Dinaw Mengestu, author of "The Beautiful Things That Heaven Bears "and "How to Read the Air"
Helen Oyeyemi is the author of The Icarus Girl, The Opposite House, White is for Witching (which won the Somerset Maugham Award), Mr Fox and the short story collection What is Not Yours is Not Yours. In 2013, Helen was included in Granta's Best of Young British Novelists.
GOR002927030
9780330536264
0330536265
Mr Fox by Helen Oyeyemi
Helen Oyeyemi
Used - Very Good
Paperback
Pan Macmillan
2011-06-03
288
N/A
Book picture is for illustrative purposes only, actual binding, cover or edition may vary.
This is a used book - there is no escaping the fact it has been read by someone else and it will show signs of wear and previous use. Overall we expect it to be in very good condition, but if you are not entirely satisfied please get in touch with us
Trustpilot