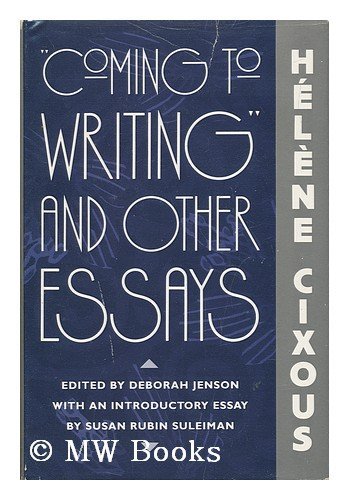 Coming to Writing and Other Essays
by Helene Cixous

Used Price
$57.99
inc. GST
Free Shipping in Australia
Presents six essays by the French author Helen Cixous. Known for her work on sexual difference and its relation to the literary text, she explores here the problematics of a "feminine" mode of writing, basing her method on the premise that differences between the sexes manifest themselves in texts.
Reviews:
Trustpilot
Very Good

Coming to Writing and Other Essays Summary

Coming to Writing and Other Essays by Helene Cixous

Of Helene Cixous's many and diverse writings, few have been translated into English. This collection presents six essays by one of France's most remarkable contemporary authors. Cixous is known for her work on sexual difference and its relations to literary text. Here she explores the problematics of a "feminine" mode of writing, basing her method on the premise that differences between the sexes - viewed as a paragdigm for all difference, which is the organizing principle behind identity and meaning - manifest themselves, write themselves, in texts. "Tancredi Continues" and "The Last Painting or the Portrait of God" question the enigma of sexual difference and the origins of writing through artistic practices analogous to writing (music and painting). The title essay explores Cixous's decision to become an author and the problems raised by a woman's writing herself into history and into a particular literary and cultural tradition. The remaining essays examine another aspect of her work: her ongoing dialogue with the Brazilian writer Clarice Lispector. "By the light of an Apple" and "Clarice Lispector: The Approach" are celebrations of Cixous's Brazilian contemporary. In "The Author in Truth" Cixous quotes passages from Lispector and discusses them in detail, providing a sense of why Lispector has assumed such importance in her life. This volume aims to be of interest not only to scholars who are engaged in the task of understanding Cixous as writer and theorist but to all readers seeking a unique and exciting voice.

Customer Reviews - Coming to Writing and Other Essays

Coming to Writing and Other Essays Reviews

Cixous, important as she is as a feminist theorist and activist, is equally important as an accurate emotional sounding board for women everywhere. As such, her articulation of powerful, if delicate, perceptions in lucid prose/poetry compels the attention of European and American readers...The power of her prose is philosophically sound.
The tradition of Cixous's interest in feminine writing and talent at manipulating words continues in this collection. YIn one essay she describes vividly how she was overcome by the intoxication of writing...Other essays explore the influence of music and gender on writing...and painting. In all cases the language is visual and jewel-like, sparkling with color.
Deborah Jenson judiciously selects from Cixous's output between 1976-89 'Coming to Writing, ' 'Clarice Lispector: The Approach, ' 'Tancredi continues, ' 'The Last Painting or the Portrait of God, ' 'By the Light of an Apple, ' and 'The Author in Truth.' Her perceptive closing essay, together with Susan Suleiman's introduction...trace the umbilical links between Cixous's end-stopped poetic-philosophic prose and her roots which anchor her perilously between two holocausts, Jewish and colonial, and two tongues German and the classical French...These essays highlight a wealth of disparate inspiration...Yin an ideal guide to Cixous. -- Elizabeth Moles "Times Higher Education Supplement YUK"

"Writing Past the Wall", Susan Rubin Suleiman; coming to writing; Clarice Lispector - the approach; Tancredi continues; the last painting or the portrait of God; by the light of an apple; the author in truth; "Coming to Reading Helene Cixous", Deborah Jenson.

GOR002351019
Coming to Writing and Other Essays by Helene Cixous
Helene Cixous
Used - Very Good
Hardback
Harvard University Press
1991-09-06
238
0674144368
9780674144361
N/A
Book picture is for illustrative purposes only, actual binding, cover or edition may vary.
This is a used book - there is no escaping the fact it has been read by someone else and it will show signs of wear and previous use. Overall we expect it to be in very good condition, but if you are not entirely satisfied please get in touch with us.