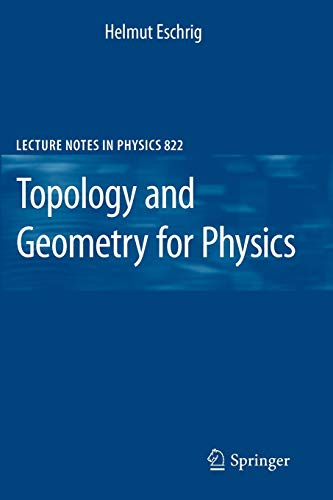 Topology and Geometry for Physics by Helmut Eschrig

A concise but self-contained introduction of the central concepts of modern topology and differential geometry on a mathematical level is given specifically with applications in physics in mind.

Topology and Geometry for Physics by Helmut Eschrig

A concise but self-contained introduction of the central concepts of modern topology and differential geometry on a mathematical level is given specifically with applications in physics in mind. All basic concepts are systematically provided including sketches of the proofs of most statements. Smooth finite-dimensional manifolds, tensor and exterior calculus operating on them, homotopy, (co)homology theory including Morse theory of critical points, as well as the theory of fiber bundles and Riemannian geometry, are treated. Examples from physics comprise topological charges, the topology of periodic boundary conditions for solids, gauge fields, geometric phases in quantum physics and gravitation.

"It consists of nine main chapters ... and the final Compendium which summarizes the volume in thirty two pages the basic geometric concepts and facts used in the book. ... the author really has achieved his purpose, namely he wrote a book rigorous in a mathematical sense, nevertheless not over-loaded by the physically non-necessary proofs and mathematical details, and at the same time giving to the reader a rigorous mathematical explanation of physical phenomena, often quite recently discovered and not commonly known." (Jan Jerzy Slawianowski, Journal of Geometry and Symmetry in Physics, Vol. 25, 2012)

"The author describes well the purpose of this text. It is to present to the theoretical physicist much of modern mathematics s/he may need ... with an emphasis on the motivation for the new concepts introduced. ... The resulting book achieves these aims to a large extent. The new concepts are motivated ... from physical examples before a precise definition is given. ... Altogether this book contains a lot of useful material ... written in a very concise style." (Hans-Peter Kunzle, Mathematical Reviews, Issue 2012 a)

"The book is intended as bridging material between advanced graduate textbooks of modern analysis and mathematical physics ... . The text is of high quality and has the explicit aim to summarize and communicate current knowledge in an accessible way. The book mainly addresses students in solid state and statistical physics regarding the focus and the choice of examples of application, but it can be useful for particle physicists, too." (S. Moskaliuk, Zentralblatt MATH, Vol. 1222, 2011)

Introduction.- Topology.- Manifolds.- Tensor Fields.- Integration, Homology and Cohomology.- Lie Groups.- Bundles and Connections.- Parallelism, Holonomy, Homotopy and (Co)homology.- Riemannian Geometry.- Compendium.
NLS9783642146992
9783642146992
3642146996
Topology and Geometry for Physics by Helmut Eschrig
Helmut Eschrig
Lecture Notes in Physics
New
Paperback
Springer-Verlag Berlin and Heidelberg GmbH & Co. KG
2011-02-09
390
N/A
Book picture is for illustrative purposes only, actual binding, cover or edition may vary.
This is a new book - be the first to read this copy. With untouched pages and a perfect binding, your brand new copy is ready to be opened for the first time
Trustpilot