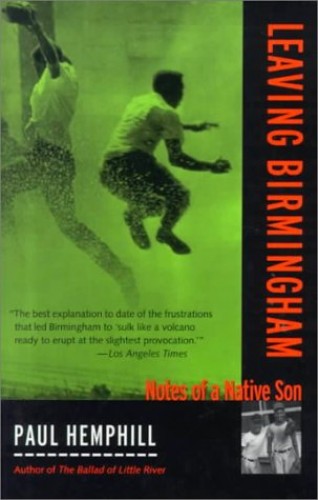 Birmingham's history of racial violence and bigotry is the centerpiece of this intense and affecting memoir about family, society, and politics in a city still haunted by its notorious past.

P>Birmingham's history of racial violence and bigotry is the centerpiece of this intense and affecting memoir about family, society, and politics in a city still haunted by its notorious past.

In 1963, Birmingham was the scene of some of the worst racial violence of the civil rights era. Police commissioner "Bull" Connor loosed dogs and turned fire hoses on black demonstrators; four young girls at Sunday school were killed when a bomb exploded in a black church; and Martin Luther King, Jr., wrote his famous letter from the Birmingham jail, defending his activism to fellow ministers.

Birmingham native Paul Hemphill, disillusioned with his hometown, had left home to pursue a journalistic career, so he witnessed these historic events with the rest of the world through newspaper and television reports. "That grim old steel town," he writes, "was the most blatantly segregated city of its size in the United States of America, and most of us regarded it with the same morbid fascination that causes us to slow down and gawk at a bloody wreck on the highway."

Thirty years later, Hemphill returned to Birmingham to explore the depths of change that had taken place in the decades since the violence. In this powerful memoir, he interweaves his own autobiography with the history of the city and the stories of two very different Birmingham residents: a wealthy white matron and the pastor of the city's largest black church. As he struggles to come to terms with his own conflicting feelings toward his father's attitudes, Hemphill finds ironic justice in the integration of his childhood neighborhood and a visit with the black family who moved into his family's former home.

"The best explanation to date of the frustrations that led Birmingham to 'sulk like a volcano ready to erupt at the slightest provocation."--Los Angeles Times
"Leaving Birmingham is family memoir, social history, political chronicle. . . . Paul Hemphill tells a story that can interest any reader who tracks the spore of American lives in the twentieth century."--Cleveland Plain Dealer

Paul Hemphill, a former columnist for the Atlanta Journal, is the author of numerous books, including most recently The Ballad of Little River, a book about Little River, Alabama, site of a black church burning in 1997. Hemphill lives in Atlanta with his wife, Susan Percy.

GOR010091178
Leaving Birmingham by Hemphill
Hemphill
Used - Very Good
Paperback
The University of Alabama Press
2000-01-10
384
0817310223
9780817310226
N/A
Book picture is for illustrative purposes only, actual binding, cover or edition may vary.
This is a used book - there is no escaping the fact it has been read by someone else and it will show signs of wear and previous use. Overall we expect it to be in very good condition, but if you are not entirely satisfied please get in touch with us.