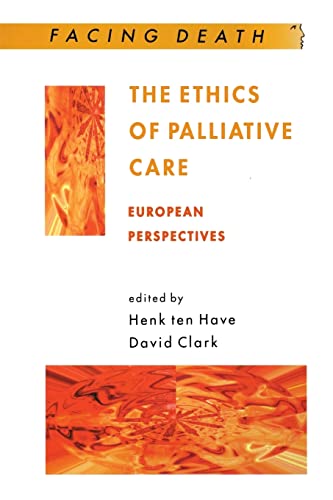 The Ethics Of Palliative Care
by Henk Ten Have

In Stock
$10.49
+10% GST
Palliative care practice requires ethical sensitivity and understanding. At the same time the very existence of palliative care calls for ethical explanation. This book, with contributions by clinicians, ethicists, philosophers and social scientists, provides a picture of palliative care ethics in the European context.
Very Good
Only 4 left

The Ethics Of Palliative Care Summary

The Ethics Of Palliative Care by Henk Ten Have

As palliative care develops across many of the countries of Europe, we find that it continues to raise important ethical challenges. Palliative care practice requires ethical sensitivity and understanding. At the same time the very existence of palliative care calls for ethical explanation. Ethics and palliative care meet over some vital issues: 'the good death', sedation at the end of life, requests for euthanasia, futile treatment, and the role of research. Yet palliative care appears uncertain about its goals and there is evidence that its ethical underpinnings are changing. Likewise, the moral problems of palliative care are only partly served by the four 'principles' of modern bioethics. This innovative book, with contributions by clinicians, ethicists, philosophers and social scientists, provides the first ever picture of palliative care ethics in the European context. It will be of interest to those involved in the delivery and management of palliative care services, as well as to students and researchers.

The Ethics Of Palliative Care Reviews

"If your professional life is organized such that reflective practice is a practical reality, I believe there is much in this book to stimulate and encourage your thinking." - Jim Gilbert

About Henk Ten Have

Henk ten Have is Professor of Medical Ethics and Chair of the Department of Ethics, Philosophy and History of Medicine in the University Medical Centre Nijmegen, the Netherlands. He has been the co-ordinator of the EU funded Pallium project on palliative care ethics. He has published on many issues in bioethics and philosophy of medicine, with particular emphasis on end-of-life care and palliative care. His recent publications are: Palliative care in Europe. Concepts and policies (Amsterdam, IOS Press, 2001) and Bioethics in a European perspective (Dordrecht, Kluwer, 2001).

David Clark is Professor of Medical Sociology within the Palliative Medicine Academic Unit of the University of Sheffield. He has written widely on the sociology of religion, family life and end of life care. He has been involved in research and teaching in palliative care since 1989. His current interests include the history of hospice, palliative care and related fields; policy development and international issues in the growth of palliative care; and palliative care ethics. He is the editor of the Facing Death Series for Open University Press.

Series editor's preface
Introduction
the work of the Pallium Project

Part one: Concepts and models of care

GOR003225429
The Ethics Of Palliative Care by Henk Ten Have
Henk Ten Have
Used - Very Good
Paperback
Open University Press
2002-04-01
272
0335211402
9780335211401
N/A
Book picture is for illustrative purposes only, actual binding, cover or edition may vary.
This is a used book - there is no escaping the fact it has been read by someone else and it will show signs of wear and previous use. Overall we expect it to be in very good condition, but if you are not entirely satisfied please get in touch with us.