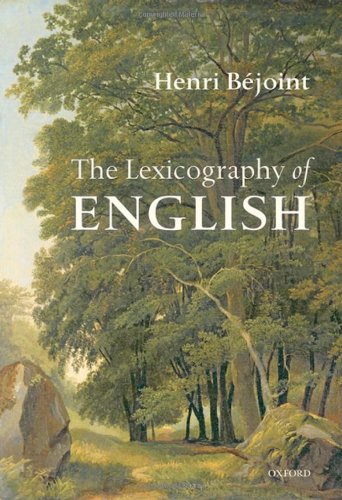 The Lexicography of English
by Henri Bejoint

Out of Stock
$68.99
inc. GST
This book looks at English dictionaries in Great Britain and the USA from 1600 to today. It is both a definitive history of the lexicography of English and a complete introduction to the making of dictionaries. Wide-ranging, wittily written, and authoritative it will appeal to everyone interested in dictionaries, English, and language.
Good
Only 0 left

The Lexicography of English Summary

The Lexicography of English by Henri Bejoint

This book looks at how English words have been recorded, ordered, dissected, and displayed in dictionaries in Great Britain and the USA from the seventeenth century to the present. In the process it offers a complete introduction to how dictionaries are made. It considers the aims of their authors, the methods of their compilation, and the concepts and beliefs that lie behind them. Henri Bejoint compares the descriptive approach of English lexicography with its more prescriptive American counterpart, and contrasts both with the lexicography of France. Computers have transformed the way dictionaries are produced and presented. Yet, as the author shows, many aspects of lexicography have hardly changed over the centuries: the challenge of distinguishing a word's senses, for example, and of tracing the history of its forms and uses. Problems equally remain: how to treat taboo-words and insults is as difficult as it ever was and the nature of meaning is subject still to fierce debate. The history of lexicography is characterized by the ambitions and achievements of great eccentrics and yet greater intellects. Johnson, Webster, and Murray stalk these pages with a host of scholars and enterpreneurs: Professor Bejoint vividly documents their lives and deftly takes apart their work. "Dictionaries are an endless source of enjoyment," he writes, "and perhaps the most important object of this book is to try to persuade the reader that lexicography is a fascinating domain." He triumphantly succeeds.

The Lexicography of English Reviews

This well-written book is a treasure-house of information .. . an eminently readable book. A set of illustrations (samples of dictionary pages) enhances its value, as do a copious bibliography and indexes. * Anatoly Liberman, Kernerman Dictionary News *
The Lexicography of English is a very interesting and stimulating book and I read it from cover to cover with a lot of pleasure. It tackles all the hot topics that are currently debated in lexicography circles today and can serve as a useful reference tool for teaching and for research A highly readable book which provides a real treasure trove of food for thought for anyone who is interested in dictionaries in general, and English dictionaries in particular. * Thierry Fontenelle, International Journal of Lexicography *
A splendid volume. Henri Bejoint displays a quite astonishing range of reference, and I think he manages the French connection with great tact. * Noel Osselton *
magisterial review of the lexicography of English...Henri Bejoint has produced a scholarly account of English lexicography that ranges broadly across the field. Dictionaries are "mouthpieces of a culture"; Bejoint shows how we have codified our culture in our dictionaries. * Howard Jackson, Times Literary Supplement *

Henri Bejoint is Professor Emeritus at the University of Lyon. In 1997-8 he was President of the European Association for Lexicography. He has published extensively on lexicography in French and English, including Tradition and Innovation in Modern English Dictionaries (OUP 1994) and, with Richard Wakely, French Usage (OUP 1996). With Phillippe Thoiron he is co-editor of Les Dictionnaires Bilingues (Duculot 1996) and Le Sens en terminologie (Presses Universitaires de Lyon 2000) and, with Francois Maniez, of De la mesure dans les termes (Presses Universitaires de Lyon 2005).

GOR010196618
The Lexicography of English by Henri Bejoint
Henri Bejoint
Used - Good
Hardback
Oxford University Press
2010-02-14
516
0198299672
9780198299677
N/A
Book picture is for illustrative purposes only, actual binding, cover or edition may vary.
The book has been read but remains in clean condition. All pages are intact and the cover is intact. Some minor wear to the spine.