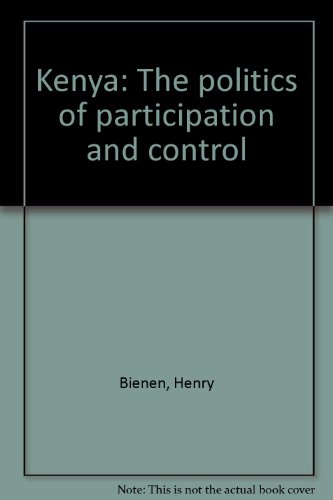 Kenya: The Politics of Participation and Control by Henry Bienen

Kenya has been the object of much controversy among students of African politics. Some view it as one of the greatest "successes" of the post-independence period; others see it as an example of all that is wrong with African development. Henry Bienen approaches this controversy by asking whether the concept of political participation has been properly understood in the African context.

His case study of political participation in Kenya discusses administration, party politics, ethnicity, and class. He suggests that in a system dominated by elites, individuals and groups exert influence primarily through patron-client networks and local administrative and party organs. Local politics is the most important arena for most people, it is argued. As long as the regime adopts policies which maximize economic growth and take account of peasant middle and small holders, and as long as individual representatives can be replaced even though no change of regime occurs, limited political participation leads to political stability.

GOR010167684
Kenya: The Politics of Participation and Control by Henry Bienen
Henry Bienen
Center for International Affairs, Harvard University
Used - Very Good
Paperback
Princeton University Press
1977-06-21
234
0691000220
9780691000220
N/A
Book picture is for illustrative purposes only, actual binding, cover or edition may vary.
This is a used book - there is no escaping the fact it has been read by someone else and it will show signs of wear and previous use. Overall we expect it to be in very good condition, but if you are not entirely satisfied please get in touch with us.