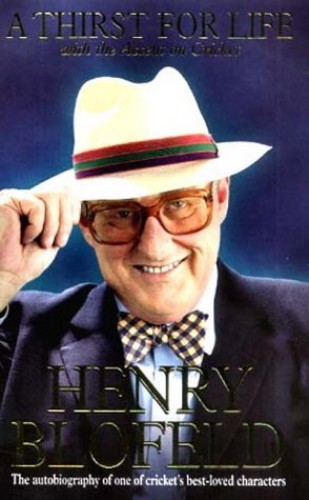 A Thirst for Life
by Henry Blofeld

A Thirst for Life Summary

A Thirst for Life: With The Accent on Cricket by Henry Blofeld

With his trademark bow-tie, his distinctive rich, plummy voice and his vividly eccentric observations Henry Blofeld is one of Britain's prized exports. He has been close to the heart of the game for over forty years. As a leading commentator on Test Match Special and cricket writer, at home and abroad, he has informed and entertained wide audiences with his extensive knowledge and perception of cricket at the very highest level. Last year Henry Blofeld was forced by major heart surgery to take stock of his life. And here it is in this fine and illuminating autobiography, full of sharp pictures and vivid memories, a few sad, and many hilariously funny.

Customer Reviews - A Thirst for Life

A Thirst for Life Reviews

A Thirst for Life cannot be praised too highly. It is erudite, eccentric, eclectic and otherwise extremely well written...Blofeld is a latter-day Wodehouse with his witty obeservations of people and class * Independent *
A meticiously researched book and well worth a read...it is difficult to put down. * The Times *
No shortage here of shrewd comment and fascinating in-pavilion gosip * Sunday Telegraph *
An elegant journey from the playing fields of Eton in the 1950s...into the muddy waters of today's match fixing allegations * Independent on Sunday *

Henry began writing about cricket, for The Times, in May 1962 and in 1972 he started his long career as a commentator with the BBC's Test Match Special. During his career he has written for numerous papers and broadcast for both radio and television for many networks around the world especially in Australia and New Zealand. Between 1991 and 1993 he joined Sky Television before returning to Test Match Special after the death of Brian Johnston early in 1994. Since 2002 Henry Blofeld has performed in his humorous one-man show in theatres all round the country, and later he teamed up with his former TMS producer, Peter Baxter, for more than 250 two-man shows. He also had a successful partnership with England Spin Bowler, Graeme Swann. Henry now tours the country with his one man show.

GOR002898030
A Thirst for Life: With The Accent on Cricket by Henry Blofeld
Henry Blofeld
Used - Very Good
Paperback
Hodder & Stoughton General Division
2001-08-16
464
0340770503
9780340770504
N/A
Book picture is for illustrative purposes only, actual binding, cover or edition may vary.
This is a used book - there is no escaping the fact it has been read by someone else and it will show signs of wear and previous use. Overall we expect it to be in very good condition, but if you are not entirely satisfied please get in touch with us.