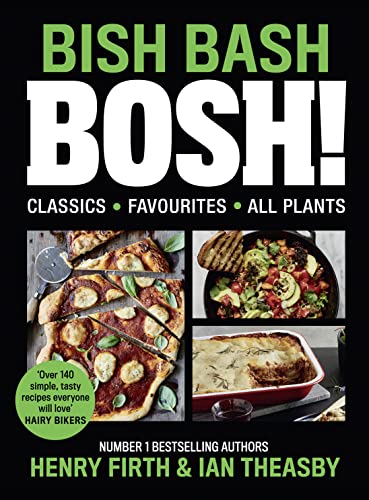 As seen on ITV's Living on the Veg

Do you want a quick weeknight supper that gets more veg into your diet? A show-stopping vegan summer barbecue? A fun, fresh meal plan to set you up with plant-based packed lunches? Whatever you're after, BISH BASH BOSH! has the perfect recipe.

Henry and Ian have created a food revolution through the world's biggest plant-based platform. Their first cookbook, BOSH!, is the highest-selling vegan cookbook ever, and with over 2 million followers across all their fast-growing channels, BOSH! are on a mission to show the world just how versatile veg can be.

In BISH BASH BOSH! you'll discover a whole world of quick eats, weeknight suppers, showstopping feasts, and incredible sweet treats - all using the power of plants. From a hearty, classic lasagne to an indulgent mini banoffee meringue, and from quick quesadillas to an incredible curry house jalfrezi, these are simple, savvy recipes that you'll turn to time and again.

Whether you are a committed vegan, trying plant-based food for the first time, or simply just want to try a meal a week without meat, this book has all the know-how and inspiration you need.

'Over 140 simple, tasty recipes everyone will love'
Hairy Bikers

'Food I want to eat: delicious and original'
ANNA JONES, author of A Modern Way to Eat

"BOSH have stepped it up another gear with a new and amazing range of delicious dishes!"
Brett Cobley

'Having conquered the vegan market, the pair are back with even more plant-based delights, encompassing weeknight dinners, delicious puddings and vegan takes on popular fare' The I

'The Vegan Jamie Olivers'
The Times

'The new stars of plant-based eating'
Mail on Sunday

GOR009840630
BISH BASH BOSH! by Henry Firth
Henry Firth
Used - Very Good
Hardback
HarperCollins Publishers
2019-04-04
288
000832705X
9780008327057
N/A
Book picture is for illustrative purposes only, actual binding, cover or edition may vary.
This is a used book - there is no escaping the fact it has been read by someone else and it will show signs of wear and previous use. Overall we expect it to be in very good condition, but if you are not entirely satisfied please get in touch with us.