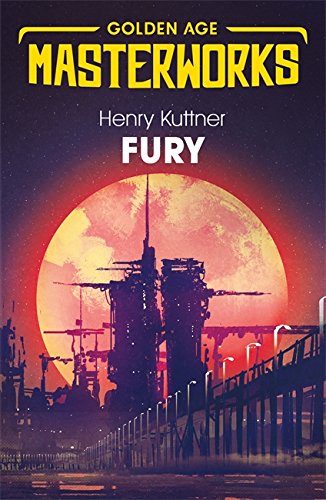 The Earth is long dead, blasted apart, and the human survivors who settled on Venus live in huge citadels beneath the Venusian seas in an atrophying, class-ridden society ruled by the Immortals - genetic mutations who live a thousand years or more. Sam Reed was born an immortal, born to rule those with a normal life-span, but his deranged father had him mutilated as a baby so that he wouldn't know of his heritage. And Sam grew up on the wrong side of the tracks and the law, thinking of the Immortals as his enemies. Then he reached the age of eighty, understood what had happened to him and went looking for revenge - and changed his decaying world forever.

Fury is a powerful, dark and compelling novel that explores the sensual, bloody and urgent nature of humankind's striving.

Kuttner was exceptional. [He] died in 1958 at the ripe young age of forty-three. Our own minds were extinguished a little in responseKuttner has power, a way with words, and grasp of technique . . . brings life and reality to his stories. - New York TimesA pomegranate writer: popping with seeds - full of ideas.Fury shows how under conditions incomprehensibly different from those we now experience, mankind once again starts up the long climb from decay to greatnessOne of the most able and versatile of modern sf writers - Encyclopedia of Science Fiction

Henry Kuttner (1915 -1958)
Henry Kuttner was born in Los Angeles, in 1915. As a young man he worked for the literary agency of his uncle, Laurence D'Orsay, before selling his first story, 'The Graveyard Rats', to Weird Tales in early 1936. In 1940 Kuttner married fellow writer C. L. Moore, whom he met through the 'Lovecraft Circle'", a group of writers and fans who corresponded with H. P. Lovecraft. During the Second World War, they were regular contributors to John W. Campbell's Astounding Science-Fiction, and collaborated for most of the 40's and 50's, publishing primarily under the pseudonyms Lewis Padgett and Lawrence O'Donnell. In 1950 he began studying at the University of Southern California, graduating in 1954. He was working towards his masters degree but died of a heart attack in 1958, before it was completed.

GOR009834581
Fury by Henry Kuttner
Henry Kuttner
Golden Age Masterworks
Used - Very Good
Paperback
Orion Publishing Co
2019-01-08
224
1473222559
9781473222557
N/A
Book picture is for illustrative purposes only, actual binding, cover or edition may vary.
This is a used book - there is no escaping the fact it has been read by someone else and it will show signs of wear and previous use. Overall we expect it to be in very good condition, but if you are not entirely satisfied please get in touch with us.