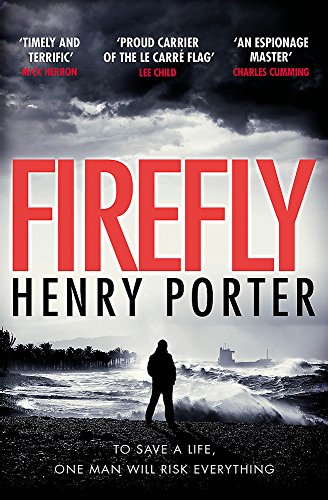 A superb new international thriller from this acclaimed and prize-winning writer: the boy could lead them straight to a terror threat at the heart of Europe. They just have to find him first - before the other side does

'A welcome return ... Firefly seems ripped from the headlines and is both timely and terrific' Mick Herron

From the refugee camps of Greece to the mountains of Macedonia, a thirteen year old boy is making his way to Germany and safety. Codenamed 'Firefly', he holds vital intelligence: unparalleled insight into a vicious ISIS terror cell, and details of their plans. But the terrorists are hot on his trail, determined he won't live to pass on the information.

When MI6 become aware of Firefly and what he knows, the race is on to find him. Paul Samson, ex-MI6 agent and now private eye, finds himself recruited to the cause. Fluent in Arabic thanks to his Lebanese heritage, Samson's job is to find Firefly, win his trust and get him to safety.

A devastatingly timely thriller following the refugee trail from Syria to Europe, Firefly is a sophisticated, breathtaking race against time from the acclaimed and award-winning author of Brandenburg and The Dying Light.

Beautifully written and filled with fascinating, if thoroughly disturbing, insights into ISIS's cruel mentality and the physical and mental hardships suffered by desperate homeless refuges, this is possibly the most exciting thriller you'll read this summer * Irish Independent *
This epic novel of spies and migrants should be up there for the year's thriller awards ... remarkable ... his best book yet. Full of poignant scenes and mesmeric action sequences * Sunday Times *
With its vivid portrait of the flood of refugees moving west from Macedonia, Serbia and Turkey, the book could not be more timely. Porter's sympathy for the dispossessed is as cogent here as his skill at sustaining narrative tension * Guardian *
Splendid... precocious Syrian 13-year-old Naji is a hero of appeal and intelligence * The Times *
Porter is a wizard with words ... a very good thriller * Literary Review *
The boy's desperate journey and the people he meets along the way, coupled with Sampson's hunt for him using every play in the modern spy's training manual, make for a totally enthralling story told with pace and compassion * Shots Mag *
A worthy addition to Porter's impressive canon of post-Cold War spy thrillers * Mail on Sunday *
Henry Porter was a regular columnist for the Observer and now writes about European power and politics for The Hive website in the US. He has written six bestselling thrillers, including Brandenburg, which won the CWA Ian Fleming Steel Dagger, A Spy's Life and Empire State, which were both nominated for the same award. His most recent thriller was the universally praised Firefly. Henry Porter is frequently described as the heir to John le Carre. He lives in London.
GOR009880173
9781787470507
1787470504
Firefly: Winner of the 2019 Wilbur Smith Adventure Writing Prize by Henry Porter
Henry Porter
Paul Samson Spy Thriller
Used - Very Good
Paperback
Quercus Publishing
2018-06-19
480
N/A
Book picture is for illustrative purposes only, actual binding, cover or edition may vary.
This is a used book - there is no escaping the fact it has been read by someone else and it will show signs of wear and previous use. Overall we expect it to be in very good condition, but if you are not entirely satisfied please get in touch with us
Trustpilot