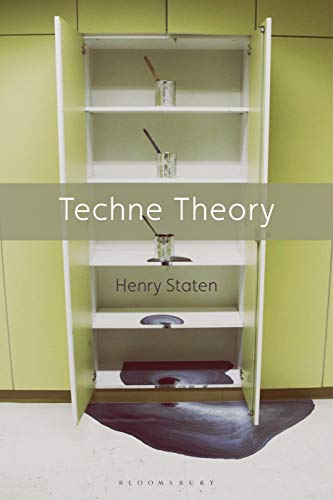 Only since the Romantic period has art been understood in terms of an ineffable aesthetic quality of things like poems, paintings, and sculptures, and the art-maker as endowed with an inexplicable power of creation. From the Greeks to the 18th century, art was conceived as techne--the skill and know-how by which things and states of affairs are ordered. Techne Theory shows how to use this concept to cut through the Romantic notion of art as a kind of magic by returning to the original sense of art as techne, the standpoint of the person who actually knows how to make a work of art. Understood as techne, art-making, like all other cultural accomplishments, is a form of work performed by an artisan who has inherited the know-how of previous generations of artisans. Along the way, Techne Theory cuts through the humanist-structuralist impasse over the question of artistic agency and explains what 'form' really means.

Each of the diverse chapters makes for highly interesting (and for an analytic philosopher refreshingly different) reading ... [For] analytic philosophers of aesthetics, who have for the most part neglected the topic of creativity, this book is interesting and creative in both style and content. * Notre Dame Philosophical Reviews *
From the standpoint of techne theory, Kant's most radical insight concerned the limitation of the creative power of individual genius, which cannot account for the emergence of the novelty or the formal evolution of the artwork. Building on this critical insight, Staten creates a highly original phenomenological investigation into the technical components of "art-making," remaining grounded in material processes and what art and literary theory can (and cannot) tell us about them. -- Gregg Lambert, Dean's Professor and Director of the Syracuse University Humanities Center, USA
In this learned, original, important, and always lively new study, Henry Staten moves today's heated and often sterile debate about aesthetic form to a new place-a place that is also (and in the best sense), an old place, newly inhabited. Staten rethinks Plato's and Aristotle's concepts of eidos and techne in three ways: first, by bringing searching attention of a scholarly and critical kind to tensions and contradictions within the founding works themselves; second, by making those works respond to the very developments that they sponsored in both Romantic and modernist works; and third, by coordinating ancient Greek concepts of art, form, medium, making, and doing, with a posthumanist framework that reunites knowledge and know-how, theory and practice, eidos and hyle, and vates and poietes. Anyone with any interest in the idea of form (and in the formation of ideas) should read this book. It changes the game we've been playing. -- Marjorie Levinson, F.L. Huetwell Professor of English, University of Michigan, USA * 15/01/2019 *

Henry Staten is Byron W. and Alice L. Lockwood Professor in the Humanities, University of Washington, USA. His acclaimed first book, Wittgenstein and Derrida (1984) was one of the first philosophical commentaries on deconstruction. Since then his work has ranged widely across literature and philosophy from the Greeks through modernism.

GOR010289584
Techne Theory: A New Language for Art by Henry Staten (University of Washington, USA)
Henry Staten (University of Washington, USA)
Used - Like New
Paperback
Bloomsbury Publishing PLC
2019-02-21
216
1472592905
9781472592903
N/A
Book picture is for illustrative purposes only, actual binding, cover or edition may vary.
The book has been read, but looks new. The book cover has no visible wear, and the dust jacket is included if applicable. No missing or damaged pages, no tears, possible very minimal creasing, no underlining or highlighting of text, and no writing in the margins.