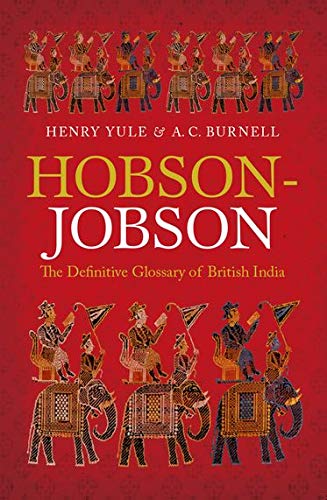 In Stock
$26,49
inc. GST
Hobson-Jobson is a unique lexicon of British India. Part dictionary, part encyclopedia it shows how words of Indian origin entered the English language and offers insight into Victorian views of Asia and the way cultures transform one another. Quirky and entertaining, this selected edition includes a fascinating introduction and notes.
Very Good
Only 1 left

Hobson-Jobson: The Definitive Glossary of British India by Henry Yule

Hobson-Jobson is a unique work of maverick scholarship. Compiled in 1886 by two India enthusiasts, it documents the words and phrases that entered English from Arabic, Persian, Indian, and Chinese sources - and vice versa. Described by Salman Rushdie as 'the legendary dictionary of British India' it shows how words of Indian origin were absorbed into the English language and records not only the vocabulary but the culture of the Raj. It encompasses aspects of the history, trade, peoples, and geography of Asia in entries that are at once authoritative and playful. Like the Oxford English Dictionary, Hobson-Jobson included illustrative quotations that were drawn from a wide range of travel texts, histories, memoirs, and novels, creating a canon of English writing about India. The definitions frequently slip into anecdote, reminiscence, and digression, and they offer intriguing insights into Victorian attitudes to India and its people and customs. With its delight in language, etymology, and puns, Hobson-Jobson has fascinated generations of writers from Rudyard Kipling to Tom Stoppard and Amitav Ghosh. This selected edition retains the range and idiosyncrasy of the original, and Kate Teltscher's introduction and notes provide fascinating information on the glossary's creation, and its significance for the English language.

Everyone interested in British India should have a copy. * Andrew Robinson, The Independent *
[Hobson-Jobson] is a work of extraordinary Victorian scholarship, compiled over 14 years. At the same time, it's an eccentric compilation of the language and lore of British India, with the same delightfully rambling, anecdotal quality as, say Brewer's Phrase & Fable, though slightly more reliable. * John Morril, The Tablet *
Hobson-Jobson is a classic of British teamwork. Its editors, Yule and Burnell, should be as celebrated as Gilbert and Sullivan, Liddell and Scott or Fortnum and Mason. For Hobson-Jobson is a rare dictionary that can be read for pleasure, like an old edition of Brewer's Dictionary of Phrase and Fable. * Christopher Howse, Sunday Telegraph *

Kate Teltscher has written about Indian literature and colonial works for both an academic and general readership. Her book The High Road to China: George Bogle, the Panchen Lama and the First British Expedition to Tibet (Bloomsbury, 2006; Farrar, Straus, Giroux, 2007) was shortlisted for the James Tait Black Memorial Prize for Biography.

GOR006309313
Hobson-Jobson: The Definitive Glossary of British India by Henry Yule
Henry Yule
Used - Very Good
Hardback
Oxford University Press
2013-06-25
624
0199601135
9780199601134
N/A
Book picture is for illustrative purposes only, actual binding, cover or edition may vary.
This is a used book - there is no escaping the fact it has been read by someone else and it will show signs of wear and previous use. Overall we expect it to be in very good condition, but if you are not entirely satisfied please get in touch with us.