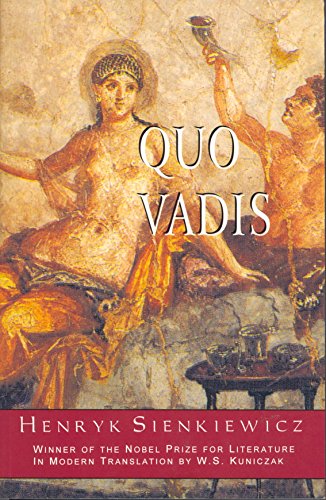 This glorious saga unfolds against the backdrop of ancient Rome-from the Forum to the Coliseum, from banquet halls to summer retreats in Naples, from the luxurious houses of the nobility to the hovels of the poor, Quo Vadis richly depicts a place and time still captivating to the modern imagination. This radiant translation by W.S. Kuniczak restores the original glory and richness of master storyteller Henryk Sienkiewicz's epic tale.

Set at a turning point in history (A.D. 54-68), as Christianity replaces the era of corruption and immorality that marked Nero's Rome, Quo Vadis abounds with compelling characters, including:

As Nero's appalling plans for the Christians become ever clearer, time appears to be running out for the young lovers. Vinicius must come to understand the true meaning of Ligia's religion before it is too late.

Grand in scope and ambition, Quo Vadis explores the themes of love, desire and profound moral courage. Lavish descriptions, vivid dialogue and brilliantly drawn characters make this one of the world's greatest epics. Beloved by children and adults the world over, Quo Vadis has been the subject of five films, two of them in English.

"Sienkiewicz wrote Quo Vadis for the entire world and the world took it to its heart."-James Michener

Henryk Sienkiewicz (1846-1916), one of Poland's foremost novelists, won the Nobel Prize for Literature in 1905. Hist historical novels (The Trilogy, Quo Vadis?, The Teutonic Knights) represent the highest achievements in the genre. Recent translations of his works have met with stunning success in the United States and have gained the author an enthusiastic new following. W.S. Kuniczak was born in Poland and escaped during the German-Soviet invasion of 1939. He was educated in France, England and the U.S.A. A noted translator of the works of Henryk Sienkiewicz, and author of his own novels including The Thousand Hour Day and The Sempinski Affair, he passed away near Philadelphia, Pennsylvania in 2000.
NPB9780781805506
9780781805506
0781805503
Quo Vadis by Henryk Sienkiewicz
Henryk Sienkiewicz
New
Paperback
Hippocrene Books Inc.,U.S.
1997-05-15
589
N/A
Book picture is for illustrative purposes only, actual binding, cover or edition may vary.
This is a new book - be the first to read this copy. With untouched pages and a perfect binding, your brand new copy is ready to be opened for the first time
Trustpilot