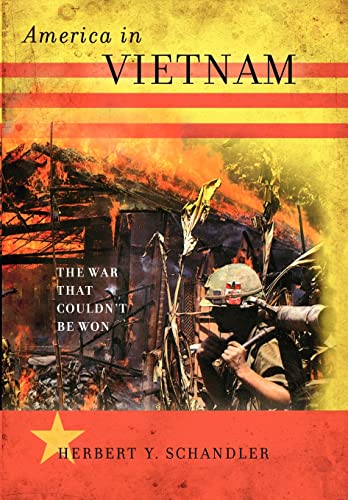 America in Vietnam: The War That Couldn't Be Won by Herbert Y. Schandler

This controversial and timely book about the American experience in Vietnam provides the first full exploration of the perspectives of the North Vietnamese leadership before, during, and after the war. Herbert Y. Schandler offers unique insights into the mindsets of the North Vietnamese and their response to diplomatic and military actions of the Americans, laying out the full scale of the disastrous U.S. political and military misunderstandings of Vietnamese history and motivations. Including frank quotes from Vietnamese leaders, the book offers important new knowledge that allows us to learn invaluable lessons from the perspective of a victorious enemy. Unlike most military officers who served in Vietnam, Schandler is convinced the war was unwinnable, no matter how long America stayed the course or how many resources were devoted to it. He is remarkably qualified to make these judgments as an infantry commander during the Vietnam War, a Pentagon policymaker, and a scholar who taught at West Point and National Defense University. His extensive personal interviews with North Vietnamese are drawn from his many trips to Hanoi after the war. Schandler provides not only a definitive analysis of the American failure in Vietnam but a crucial foundation for exploring the potential for success in the current guerrilla wars the United States is fighting in Iraq and Afghanistan.

As Herb Schandler convincingly argues, there are situations in the world that the United States cannot resolve militarily. The Vietnam War was the South's to lose and never America's to win. Read this compelling book and weep for those who tried. -- Volney Warner, General, US Army (Retired)
Schandler . . . views the Vietnam War through the eyes of the North Vietnamese, a perspective sadly lacking during that disastrous conflict. . . . While helping Americans understand what went wrong in Vietnam, Schandler's message is even more important in helping recalibrate the chance for our success in the current guerrilla wars in Iraq and Afghanistan. * Historywire *
What makes this work unique is that the author offers insight into North Vietnamese perceptions of war by including discussions and interviews with former officials. . . . Recommended. * CHOICE *
A scholarly and well-written book that provides a unique perspective not only on America in Vietnam, but also on what the other side was thinking. . . . Highly recommended. * Parameters *
Relying extensively on sources in the former North Vietnam, Schandler illustrates how North Vietnamese perceptions of the struggle were never understood by American policymakers. * Booklist *
A competent summary of principal arguments holding that the United States embarked on a futile and misguided quest in Vietnam. . . . Both highly readable and thoughtfully argued. As a concise exposition on the inexorable logic of failure in Vietnam, it fulfills the author's intent and provides a good foundation for a nonspecialist seeking a basic explanation of America's withdrawal from Vietnam. * Military Review *
[Schandler] stands out, however, as the most significant orthodox scholar coming from a military background. . . . Schandler's account is especially useful in understanding civilian-military relations and North Vietnam's response to American warfare. The conclusions are well-stated and persuasive. * Pacific Affairs *

GOR010086287
America in Vietnam: The War That Couldn't Be Won by Herbert Y. Schandler
Herbert Y. Schandler
Used - Well Read
Hardback
Rowman & Littlefield
2009-09-16
232
0742566978
9780742566972
N/A
Book picture is for illustrative purposes only, actual binding, cover or edition may vary.
This is a used book - there is no escaping the fact it has been read by someone else and it will show signs of wear and previous use. Overall we expect it to be in very good condition, but if you are not entirely satisfied please get in touch with us.