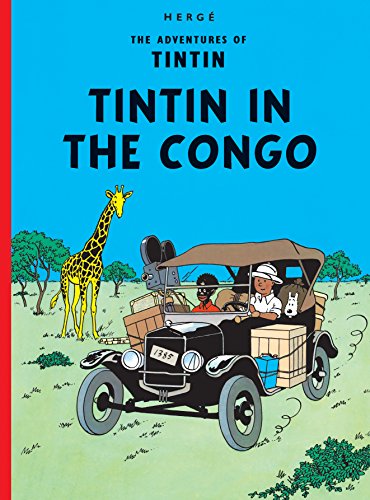 Tintin in the Congo
by Herge

Tintin has been sent to Africa! But the crocodiles, fearsome snakes and stampedes of buffalo don't make his reporting mission easy. And a shady Chicago gangster seems to be following his every move. Luckily, Tintin and Snowy have a few tricks up their sleeves.

Tintin in the Congo Summary

Tintin in the Congo by Herge

Join the world's most famous travelling reporter in two exciting adventures as he heads for the Congo.

The young reporter Tintin and his faithful dog Snowy set off on assignment to Africa. But a sinister stowaway follows their every move and seems set on ensuring they come to a sticky end. Tintin and Snowy encounter witch doctors, hostile tribesmen, crocodiles, boa constrictors and numerous other wild animals before solving the mystery and getting their story.

Join the most iconic character in comics as he embarks on an extraordinary adventure spanning historical and political events, and thrilling mysteries.

Still selling over 100,000 copies every year in the UK and having been adapted for the silver screen by Steven Spielberg and Peter Jackson in 2011. The Adventures of Tintin continue to charm more than 80 years after they first found their way into publication. Since then an estimated 230 million copies have been sold, proving that comic books have the same power to entertain children and adults in the 21st century as they did in the early 20th.

Herge (Georges Remi) was born in Brussels in 1907. Over the course of 54 years he completed 23 albums of The Adventures of Tintin series, which is now considered to be one of the greatest, if not the greatest, comics series of all time. With translations published in over 80 languages, more than 230 million copies sold worldwide and a Hollywood movie to its name, Tintin dominates the Comics and Graphic Novels chart even today. Sadly, Herge died in 1983, leaving his 24th album, Tintin and Alph-Art, unfinished, but his hero continues to be one of the most iconic characters in both adult and children's fiction.

GOR001620417
Tintin in the Congo by Herge
Herge
The Adventures of Tintin
Used - Very Good
Hardback
Egmont UK Ltd
2005-09-05
64
1405220988
9781405220989
N/A
Book picture is for illustrative purposes only, actual binding, cover or edition may vary.
This is a used book - there is no escaping the fact it has been read by someone else and it will show signs of wear and previous use. Overall we expect it to be in very good condition, but if you are not entirely satisfied please get in touch with us.