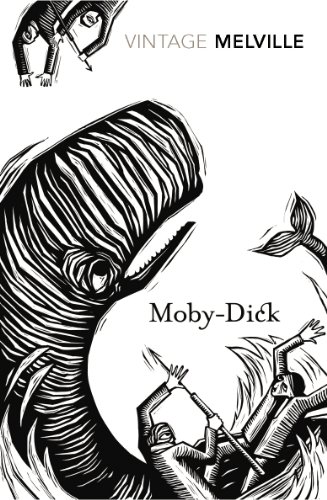 In Stock
$11.49
+10% GST
INCLUDES THE TRUE STORY THAT INSPIRED MOBY-DICK When Ishmael sets sail on the whaling ship Pequod one cold Christmas Day, he has no idea of the horrors awaiting him out on the vast and merciless ocean.
Very Good Well Read
5 in stock

INCLUDES THE TRUE STORY THAT INSPIRED MOBY-DICK When Ishmael sets sail on the whaling ship Pequod one cold Christmas Day, he has no idea of the horrors awaiting him out on the vast and merciless ocean. The ship's strange captain, Ahab, is in the grip of an obsession to hunt down the famous white whale, Moby Dick, and will stop at nothing on his quest to annihilate his nemesis.

"A masterpiece" * Guardian *
"A great book...a deep great artist" -- D.H. Lawrence
"A wonderful delight" -- Nathaniel Philbrick
"Moby Dick is my favourite novel, bar none. It works on so many levels. It taught me that you can have a top layer of narrative - like the seafaring story - and then below that all those wonderful, rich, symbolic things going on" -- Clive Barker
"To convey an adequate idea of a book of such various merits as that which the author of Typee and Omoo has here placed before the reading public, is impossible in the scope of a review. High philosophy, liberal feeling, abstruse metaphysics popularly phrased, soaring speculation, a style as many-coloured as the theme, yet always good, and often admirable; fertile fancy, ingenious construction, playful learning, and an unusual power of enchaining the interest, and rising to the verge of the sublime, without overpassing that narrow boundary which plunges the ambitious penman into the ridiculous; all these are possessed by Herman Melville, and exemplified in these volumes" * London Morning Advertiser, October 24 1851 *

Herman Melville was born in New York on 1 August 1819. He first went to sea at the age of nineteen on the St Lawrence which sailed from New York to Liverpool. He later worked as a teacher before taking to the seas again in 1841 on the whaleship Achushnet. After six months of sailing in the Pacific, Melville abandoned ship and lived among the natives of the Marquesas Islands for several weeks. This experience inspired his first book Typee (1846) which was published to great success. The sequel, Omoo, was published in 1847 and later that year Melville married Elizabeth Shaw. He published several other novels and poems, including his most famous work, Moby-Dick (1851), but his later works were not widely appreciated until long after his death. Moby-Dick is now considered one of the most important American novels of all time. Melville died on 28 September 1891.

GOR001430205
Moby-Dick by Herman Melville
Herman Melville
Used - Very Good
Paperback
Vintage Publishing
2007-08-02
672
0099511185
9780099511182
N/A
Book picture is for illustrative purposes only, actual binding, cover or edition may vary.
This is a used book - there is no escaping the fact it has been read by someone else and it will show signs of wear and previous use. Overall we expect it to be in very good condition, but if you are not entirely satisfied please get in touch with us.