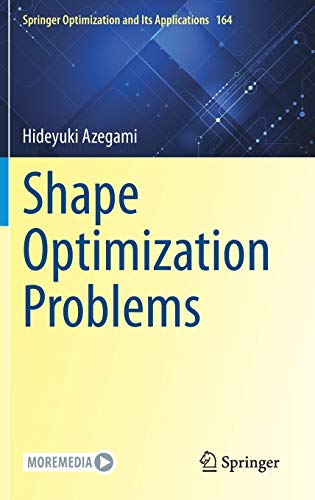 This book provides theories on non-parametric shape optimization problems, systematically keeping in mind readers with an engineering background. Non-parametric shape optimization problems are defined as problems of finding the shapes of domains in which boundary value problems of partial differential equations are defined. In these problems, optimum shapes are obtained from an arbitrary form without any geometrical parameters previously assigned. In particular, problems in which the optimum shape is sought by making a hole in domain are called topology optimization problems. Moreover, a problem in which the optimum shape is obtained based on domain variation is referred to as a shape optimization problem of domain variation type, or a shape optimization problem in a limited sense. Software has been developed to solve these problems, and it is being used to seek practical optimum shapes. However, there are no books explaining such theories beginning with their foundations.
The structure of the book is shown in the Preface. The theorems are built up using mathematical results. Therefore, a mathematical style is introduced, consisting of definitions and theorems to summarize the key points. This method of expression is advanced as provable facts are clearly shown. If something to be investigated is contained in the framework of mathematics, setting up a theory using theorems prepared by great mathematicians is thought to be an extremely effective approach. However, mathematics attempts to heighten the level of abstraction in order to understand many things in a unified fashion. This characteristic may baffle readers with an engineering background. Hence in this book, an attempt has been made to provide explanations in engineering terms, with examples from mechanics, after accurately denoting the provable facts using definitions and theorems.

GOR011101849
Shape Optimization Problems by Hideyuki Azegami
Hideyuki Azegami
Springer Optimization and Its Applications
Used - Very Good
Hardback
Springer Verlag, Singapore
2020-10-01
646
9811576173
9789811576171
N/A
Book picture is for illustrative purposes only, actual binding, cover or edition may vary.
This is a used book - there is no escaping the fact it has been read by someone else and it will show signs of wear and previous use. Overall we expect it to be in very good condition, but if you are not entirely satisfied please get in touch with us.