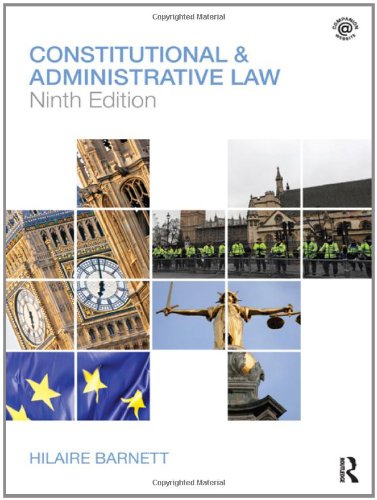 Constitutional and Administrative Law (Public Law) is a dynamic and challenging area of law which has an impact on all of our lives. Whenever a government is elected, a new piece of legislation is passed or a citizen's rights are abused, it is Public Law which provides the legal framework within which government and administration functions.

Hilaire Barnett's classic textbook equips students with an understanding of the constitution's past, present and future by analysing and illustrating the political and socio-historical contexts which have shaped the major rules and principles of public law, as well as ongoing constitutional reform.

Having undergone a rigorous editing process to offer a more concise account of public law today, contemporary developments covered in this edition include the UK's first coalition government for nearly 60 years, and recent proposals to introduce fixed-term parliaments and electoral reform.

Mapped to the common course outline, this textbook offers full coverage of the Public Law syllabus. Written in a clear and understandable style, Constitutional and Administrative Law is an invaluable resource for every student of Public Law.

"Barnett is based on high academic standards while being easy to read and to understand ... it is the perfect introductory text." Alexander Fischer, Lecturer in Law, SOAS, University of London

"The book is authoritative, thorough, well structured, clear and coherent." Philip Jones, Senior Lecturer in Law, University of the West of England