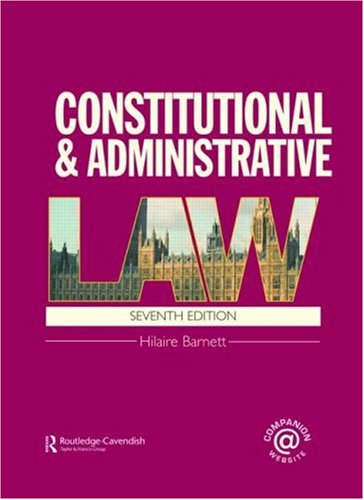 In Stock
$20.99
+10% GST
Suitable for students of public law, this title provides an exposition of the major features of the United Kingdom's constitution and various developments and proposals for reform.
Very Good
Only 2 left

This new edition of Barnett's Constitutional and Administrative Law is published against the background of continuing constitutional reform and change. Current reform plans include limiting the powers of the executive and making the executive more accountable. The power to exercise a number of important royal prerogative powers is to be transferred from the executive to Parliament. The office of Attorney General is to be reformed to create a clearer separation of powers. House of Lords reform remains on the agenda and a review of elections and voting systems is under way. The government also envisages a national debate on the constitution and citizen's rights and responsibilities - a debate which ultimately might lead to a written constitution.

This seventh edition has been fully revised in order to take into account these issues and remain an up-to-date and reliable resource for students of public law. Written in a clear and understandable style, this new edition is comprehensive and authoritative as well as comprehensible, providing a thorough exposition of the major features of the United Kingdom's constitution and recent developments and proposals for reform.

Mapped to the common course outline and consciously designed to meet the needs of students undertaking the constitutional and administrative law course, whether full or part time, undergraduate or postgraduate, this book offers full coverage of the syllabus drawn from a wide range of sources. It is now in a larger format and a contemporary new text design opens out the page and improves the layout. New pedagogical features include:

Barnett's Constitutional and Administrative Law is now firmly established as one of the leading undergraduate textbooks on public law - a must-read for any serious student of the law!

Praise for the 6th edition -

'The sixth edition of Barnett's textbook is up-to-date and has a very clear structure and presentation which makes it accessible for quick reference as well as general reading. The book contains a good amount of references to case law with case summaries in context and useful tables and appendices' - Sylvie Bacquet, University of Westminster, London, UK

'Barnett is based on high academic standards while being easy to read and to understand... it is the perfect introductory text - Alexander Fischer, SOAS, London, UK

'The sixth edition is clear, detailed and thorough... I believe students really enjoy this textbook and I strongly recommend it' - Javier Oliva, University of Wales, Bangor, UK

'I found the chapters were well divided and easy to understand. I actually used this book during revision as it was so clear, it clarified my reading from the others books which I found hard to understand, especially being my first year reading law.' - Soniya Gill, Law Graduate 2009, University of Kent

Part 1: General Introduction 1. Introduction: The United Kingdom and its Constitution 2. Sources of the Constitution Part 2: Fundamental Constitutional Concepts 3. The Rule of Law 4. The Separation of Powers 5. The Royal Prerogative 6. Parliamentary Sovereignty Part 3: The European Community and Union 7. Structures and Institutions 8. European Community Law and National Law Part 4: Central, Regional and Local Government 9. Central Government 10. Responsible Government 11. Devolution and Local Government Part 5: Parliament 12. The Electoral System 13. Introduction to the House of Commons 14. The Legislative Process 15. Scrutiny of the Executive 16. The House of Lords 17. Parliamentary Privilege Part 6: The Individual and the State 18. The Protection of Human Rights 19. Freedom from Discrimination 20. Freedom of Expression and Privacy 21. Freedom of Association and Assembly 22. The Police and Police Powers 23. Citizenship, Immigration and Asylum 24. State Security Part 7: Introduction to Administrative Law 25. Judicial Review: Introduction, Jurisdiction and Procedure 26. The Grounds for Judicial Review 27. Commissioners for Administration: Ombudsmen