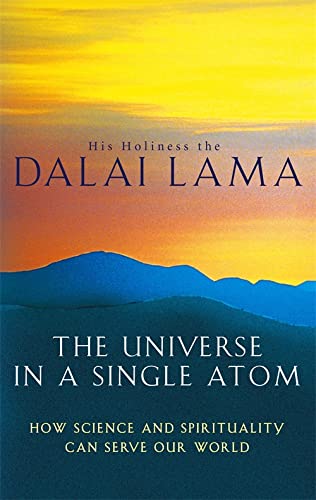 Used Price
$21.49
inc. GST
Free Shipping in Australia
* The Dalai Lama's unique and learned vision of how religion and science can work together in harmony
Very Good Good

The Universe In A Single Atom Summary

The Universe In A Single Atom: How science and spirituality can serve our world by His Holiness The Dalai Lama

In this rare personal investigation, His Holiness the Dalai Lama discusses his vision of science and faith working hand in hand to alleviate human suffering. Drawing on a lifetime of scientific study and religious practice, he explores the great debates and makes astonishing connections between seemingly disparate topics - such as evolution and karma - that will change the way we look at the world.

While he sees science and faith as 'complementary but different investigative approaches with the same goal of seeking the truth,' the fact is that the two have often been at the root of human conflict for centuries. The Dalai Lama challenges us to see that the benefits of opening our hearts and minds to the connections between science and faith are far preferable to perpetuating the divisive rhetoric that often surrounds them.

Now, as we face such troubled and uncertain times, the need has never been greater for this extraordinary man's compassion and wisdom.

The Universe In A Single Atom Reviews

With immense charm and lucidity, [the Dalai Lama] riffs on possible congruences between quantum physics or relativity and the Buddhist concept of impermanence and nothingness * Steven Poole, GUARDIAN *
Wise and compassionate * DAILY EXPRESS *
Some fascinating fresh insights ... Those who confuse the Dalai Lama's affability and simple-heartedness for a lack of intellectual rigour will be confounded by the strength of his reasoning, and no one can deny his argument that science should serve us all ... a fascinating account of an intellectual journey from the rooftops of Lhasa to the modern world * SCOTSMAN *
The lucidity of the writing is a joy, and conveys with simple elegance profound truths from both traditions. For those wishing to understand the nature of reality, this is an excellent work * THE MIDDLE WAY: JOURNAL OF THE BUDDHIST SOCIETY *

About His Holiness The Dalai Lama

His Holiness The Dalai Lama is the spiritual leader of the Tibetan people and head of the Tibetan government-in-exile. A recipient of the Nobel Peace Prize, he travels the world speaking on peace, giving Buddhist teachings and meeting with political leaders, as he works tirelessly for Tibet.

GOR001553047
The Universe In A Single Atom: How science and spirituality can serve our world by His Holiness The Dalai Lama
His Holiness The Dalai Lama
Used - Very Good
Paperback
Little, Brown Book Group
2007-11-01
240
0349117365
9780349117362
N/A
Book picture is for illustrative purposes only, actual binding, cover or edition may vary.
This is a used book - there is no escaping the fact it has been read by someone else and it will show signs of wear and previous use. Overall we expect it to be in very good condition, but if you are not entirely satisfied please get in touch with us.