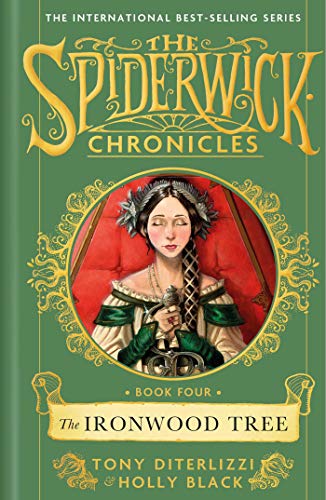 The Ironwood Tree
by Holly Black

The Ironwood Tree by Holly Black

Prepare to enter the magical world of The Spiderwick Chronicles, the bestselling series from Tony DiTerlizzi and Holly Black! Now reissued in beautiful hardback editions, perfect for fans of the series as well as a new generation of readers.

With the disappearance of Arthur Spiderwick's Field Guide, the Grace children were hoping the faerie world would finally leave them alone. But then a pack of smelly goblins snatch Simon and a band of elves try to entrap Jared and it's clear that the magical creatures are still keeping an eye on the three siblings.

So when the children notice unusual activity near the abandoned quarry just outside of town, they decide to investigate only to discover a creature with plans to rule the faerie world ... whatever the cost ...

Holly Black spent her early years in a decaying Victorian mansion where her mother fed her a steady diet of ghost stories and faerie tales. An avid collector of rare folklore volumes, spooky dolls, and crazy hats, she lives in West Long Branch, New Jersey, with her husband, Theo. Together with illustrator Tony DiTerlizzi, she is the creator of the bestselling Spiderwick Chronicles series of children's books. Tony DiTerlizzi is co-creator of the international bestselling series, The Spiderwick Chronicles. He has illustrated numerous picture books for children, including Ted, G is for 1 Gzonk and the critically acclaimed The Spider and the Fly, which won the Caldecott Honor. Tony lives in Amherst, Massachusetts with his wife, Angela, and their baby daughter, Sophia.

GOR010738977
The Ironwood Tree by Holly Black
Holly Black
SPIDERWICK CHRONICLE
Used - Like New
Hardback
Simon & Schuster Ltd
2018-09-20
144
1471174972
9781471174971
N/A
Book picture is for illustrative purposes only, actual binding, cover or edition may vary.
The book has been read, but looks new. The book cover has no visible wear, and the dust jacket is included if applicable. No missing or damaged pages, no tears, possible very minimal creasing, no underlining or highlighting of text, and no writing in the margins.