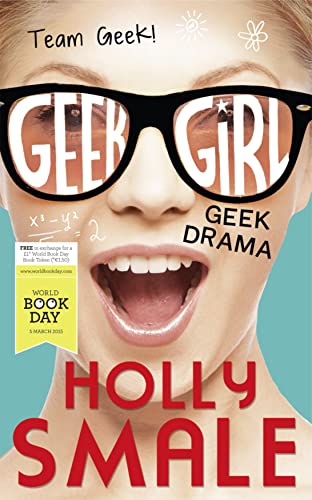 A brand new World Book Day story from the no. 1 bestselling and award-winning GEEK GIRL series!

A brand new World Book Day story from the no. 1 bestselling and award-winning GEEK GIRL series!

Harriet Manners knows that the hottest observed place on earth is Furnace Creek in Death Valley.

She knows that dolphins shed the top layer of their skin every two hours.

And she knows just how badly auditions can go, especially when you're a model.

But she has no idea how to get herself out of the extreme embarrassment of the school play or what to do when arch-nemesis Alexa decides it's the perfect opportunity to humiliate her...

Can GEEK GIRL survive the bright lights of the stage?

GOR010518099
Geek Drama (Geek Girl) by Holly Smale
Holly Smale
Geek Girl
Used - Like New
Paperback
HarperCollins Publishers
2015-02-26
128
0008113475
9780008113476
N/A
Book picture is for illustrative purposes only, actual binding, cover or edition may vary.
This is a used book - there is no escaping the fact it has been read by someone else and it will show signs of wear and previous use. Overall we expect it to be in very good condition, but if you are not entirely satisfied please get in touch with us.